In a galaxy far, far away, there’s nothing disturbing about ritually eating someone’s face. Honest. Keep telling yourself that as you tug off strands of tasty Wookie flesh. You’re not channeling your inner zombie. Heck, you’re not even the same species, so you can’t even call these horrors cannibalism.

Start off by creating a your own miniature big bang by mixing the warm water and yeast. Fifteen minutes later, your bowl will be teeming with new life. Feed your newly created minions the honey, sugar, vanilla, cinnamon, eggs, salt, and oil. That’s like giving frat boys a keg. Left to their own devices, they’ll start partying like you’ve dropped them off at a jolly cantina. Nip that in the bud by sending in the flour. It’ll quiet things down as fast as an assassin drinking nothing but water and glaring at the door.

Attach the dough hook to your stand mixer and let it churn all those ingredients together. Within 6-7 minutes, you’ll have a nice, solid dough; not too firm, not too sticky. If you’re mixing by hand, knead the dough for about 10 minutes.

It should take 60-90 minutes for your dough to double in size. Meanwhile, go watch a couple episodes of the Clone Wars Cartoon.

While you’re waiting, you can also peel and slice the pears. Once you have a nice bowl of pear chunks, cover them with cinnamon and sugar then toss everything together until the pears look as fuzzy as an Ewok. I could pretend I was using pears to symbolize a Wookie’s skeleton, but to be honest, at the last minute I discovered I was all out of apples. There’s nothing wrong with using whatever is on hand. You’re welcome to use apples or pears. Either will taste great.

Once your dough has ballooned up into a giant sphere, punch your way into it like a Tie Fighter penetrating a Death Star.

Spread a generous amount of flour over your work surface. Roll half of your dough into a large, flat rectangle, no more than ¼ inch thick. Thinner is fine. Now cover a baking sheet with aluminum foil and really grease it up with butter. The foil will protect your baking sheet from sticky, hard to clean messes while the butter will make sure your bread doesn’t cling to the foil like a needy android.

Start by cutting a roughly face shaped piece for the base. This can simply be a square with two triangles cut out of the bottom to form a chin. Feel free to get as artistic (or not) as you choose. Use a pastry or BBQ brush to paint it with that delicious melted butter. Now layer some sugared pears onto the face in a roughly oval shape, no more than an inch high. In retrospect, I should’ve made a more pronounced chin. Learn from my errors, young jedi cook.

Now, since this is pull apart bread, cut some triangles and rectangles out of your dough slab and arrange those loosely on top of the pears. They should barely overlap. Make sure your final dough arrangement is roughly face shaped. Slather it with more melted butter, then arrange a thin layer of pears on top. You’re essentially building your wookie’s skeleton out of tasty pear filling and fleshing him out with muscle and skin made of dough.

If your face is less than 2 inches tall, put on one more layer of pears and dough. If it’s 2-3 inches tall, it’s time to give your wookie some fur.

Chewbacca has a distinct widow’s peak. Pick a point in the middle of his forehead and arrange the first row of hair like a giant heart. The heart should arc up as though forming eyebrows then come back in below the eyes to form cheekbones. That will give your face a basic structure. Below the heart, arrange a nice hollow oval of dough for his mouth.

It’ll look a little silly at first, but start by giving him a long goatee. Once you’ve done that, keep cutting long strands of hair from the flattened dough. Fill in the hairline above the eyes, then fill in the hair from the cheeks downwards. It helps to have a picture of Chewbacca nearby while you’re doing this.

Complete the mouth by adding a horizontal upper layer of teeth in the form of a single long, thick almond slice. Just above that, use two more almond slices to form his fangs.

Now paint the entire thing in one more layer of butter. This is pull apart bread. You really can’t have enough butter. Once your Wookie is nicely greased up, sprinkle a healthy layer of sugar on top of your creation.

Let the face rest for about half an hour. His features should puff up a little. That’s alright. Now put him in a 350F oven to bake for 25 – 30 minutes. Since my oven has hot spots, I turned him every 8 minutes, which gave me a pretty nice, uniform overall coloration. If he’s not a dark, golden brown, keep baking, checking on him every 3 minutes.

When your Wookie comes out of the oven, do not try to make out with him. Yes, he smells delicious, but slamming your face into the dough will only result in embarrassing burns that are hard to explain. Instead, let him sit and rest for half an hour so his molten sugar filling can cool.

Once your friends have had a chance to admire your creation, invite them to literally pull him apart for their own twisted pleasure. Yes, the dark side is tasty. The long, pear-free strands near the bottom turn into crunchy cinnamon-sugar sticks while the fruit filled center becomes a nice, gooey, pull apart dessert. It’s a big, delicious, doughy mess. 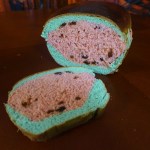 ...  loaf is inspired by the watermelon shaped chocolate chip bread I discovered over on Taste For Adventure. To my disappointment, the ...

...  and use them to fill the bottom of your well greased bread pans. Next comes Wonder Woman’s belt. You made an extra small ... 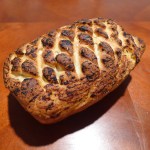 ...  my Horta’s vital life juices soak into a scrap of garlic bread I found myself wondering if it’d be even better with the ...