This is one of my favorite recipes in SteamDrunks: 101 Steampunk Cocktails and Mixed Drinks. First, it’s incredibly drinkable (unlike some of the bemusingly terrifying Victorian milk drinks). Second, it’s a perfect social drink on a dark winter night. Finally, who doesn’t love pretentious authors using any excuse to show off? Some things never change.

Gently warm your rum and brandy in a saucepan. The goal is to warm it up, not boil off the alcohol. When it’s unpleasantly warm to the touch, add in the sugar and stir until it dissolves. Once the sugar granules are nothing but a ghost of sweetness past, add in the zest and juice of your lemons. Let this simmer gently on the stove for ten minutes. Just before serving, remove it from the heat and add the bottled mineral water.

If you’re feeling fancy, you can cut out a wheel of lemon to put at the bottom of each glass. Fill the glass with punch, spike the lemon with a cinnamon stick, and top it with a sprinkle of nutmeg.

Dickens described the cinnamon, nutmeg, and lemon wheels as optional, so feel free to experiment to find a flavor you like.

Since Dickens did have a flare for the dramatic, he also offered an alternate serving method.
Instead of pouring his punch into individual glasses, bring it to the table and pour it into a large, fire-proof bowl. The last part is important if you don’t want to be drinking liquid plastic.

Float a ladle full of brandy on top of the punch. Refill the ladle with Brandy and carefully ignite the surface. Ever so slowly, pour the flaming brandy into the punchbowl. If all goes well, your waterfall of flame will set the punch in the bowl on fire. If not, you’ll look a bit pretentious, but under the circumstances, no one will be terribly surprised.

Extinguish the flames by giving the bowl a good, hearty stir, then ladle your warm, no longer flaming drink into glasses prepared with your choice of lemon wheels or cinnamon sticks. Once everyone has a glass in hand, it’s time for some ghost stories.

Sneak a peek at photos and the Series 1 Table of Contents for Dining With the Doctor: Regenerated 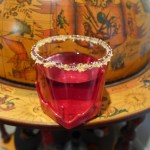