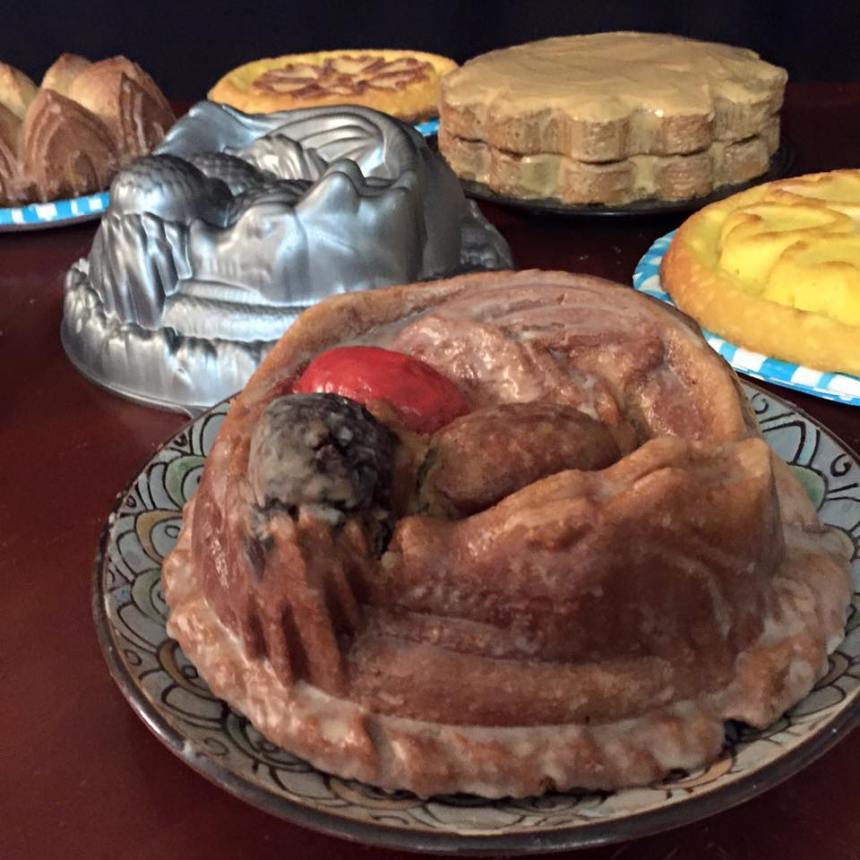 When vending at local cons I blatantly and unashamedly put home baked cakes on my table as a lure. Buy a book, get a free slice of cake baked by the Kitchen Overlord herself!

The biggest hit at this year’s IkkiCon shouldn’t have surprised me. After all, this is what I make for myself when I’m craving cake. If you’re the sort of nerd who nearly always has forgotten brown bananas and a couple bottles of hard cider around the house, everything else here is just pantry staples. Enjoy!

P.S. As you can tell from some of the photos below, I also used this recipe to field test Think Geek’s Dragon Cake Pan. I’ll have a full review of that up later in the week. 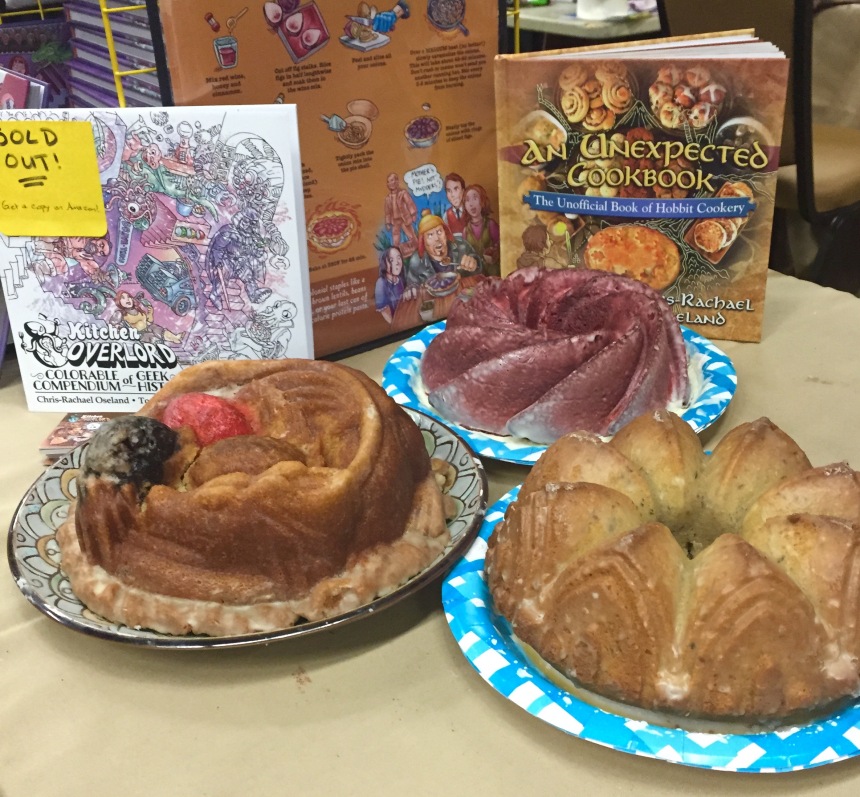 To get started, grab a shot glass and fill it with hard cider. Sure, you could just pour out two tablespoons, but using a shot glass will make you feel like a badass baker.

Pour the shot of cider, cup of powdered sugar, and an aggressively flirty pinch of cinnamon OR garam masala into a comically oversized bowl. Grab your whisk and beat it like you’re in a Michael Jackson cover band. You’ll know you’ve shown it how funky strong is your fight when it’s silky smooth.

Set the glaze aside. It’s time to batter something. Namely, your cake pan.

To get the full richness of the bananas flavor, you need to let them sit out until the skins are more black than yellow – or, as I like to call it, “nature’s pre-cooking.” As that skin darkens, all the starches in your banana are slowly transformed into sugars. The metamorphosis changes the color, texture, and performance of the fruit from a boring white stachy filler to a complex, almost caramel-like flavor with aggressive aromatics and excellent binding capabilities which let it stand in for eggs. If you use plain yellow bananas, don’t you ever come around here. There’ll be fire in my eyes, because my words are really clear.

While the bananas and friends create a disturbingly sticky mess, grab a bowl and whisk together your flour, baking powder, salt, cinnamon, and garam masala.

Ease up on all that aggressive beating. Now is the time to be gentle. Stroke the batter until the cider is just barely combined.

Generously lube up a cake pan with more vegan balance or some veggie oil. If you’re using a needlessly complicated yet awesomely shaped pan (like my dragon above) sprinkle in some flour and shake it around to ensure the pan will release its hold on your precious. 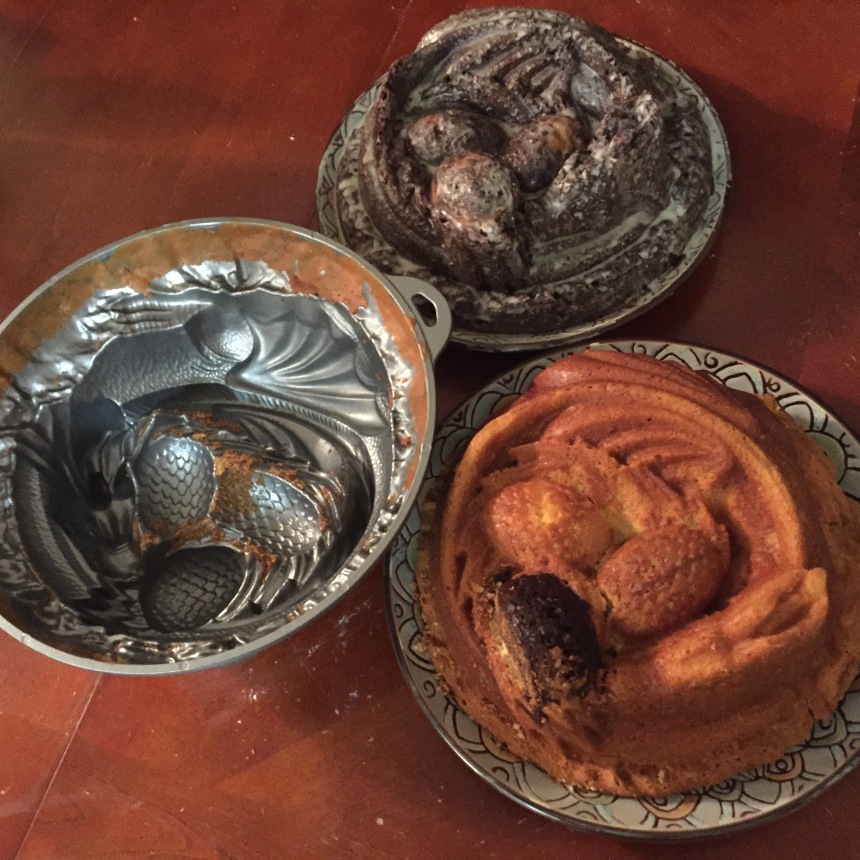 Bake at 325F for 25-30 minutes. Really keep an eye on it for the last 10 minutes so it doesn’t overbake. You don’t want it to be tough, so better do what you can to get it out of the oven as soon as a toothpick comes out clean.

When the cake is fresh from the oven, be a tease and gently run a knife along the outer edge of the pan to loosen up its inhibitions. Then let it sit and quiveringly contemplate what’s going to happen next. Come back in 15-20 minutes and gently slip it out of that cake pan and onto something more comfortable.

If you’re using a detailed pan, grab a pastry brush and gently paint the cake’s body with your freshly made glaze. This is thinner than a traditional icing specifically so you can still see all the details of your work while also preventing the cake from drying out once the baking foreplay is over.

If you’re using a traditional round or square cake pan, you can make this scene a little more intense. Instead of removing the cake from the pan, as soon as it comes out of the oven, leave it in place and poke the top with a toothpick until it looks like an acne scarred teenager. Pour on all of your glaze. Yes, all of it. Use the back of a spoon to spread it into every nook and cranny while spanking down any errant bubbles. If the surface looks too pockmarked after the glaze hardens, you can make a second batch of glaze with half as much cider. This will make it much thicker, closer to an icing. Paint that on top to hide the scars.

This cake is perfect for the vegans who show up at your next dance fight, The Warriors cosplay event, or munch.

...  pie crust. You can purchase a refrigerated one, make a vegan or gluten free pie crust from scratch, or go old school with your ...