$10 Dalek Army of Appetizers (from the new Doctor Who Cookbook) 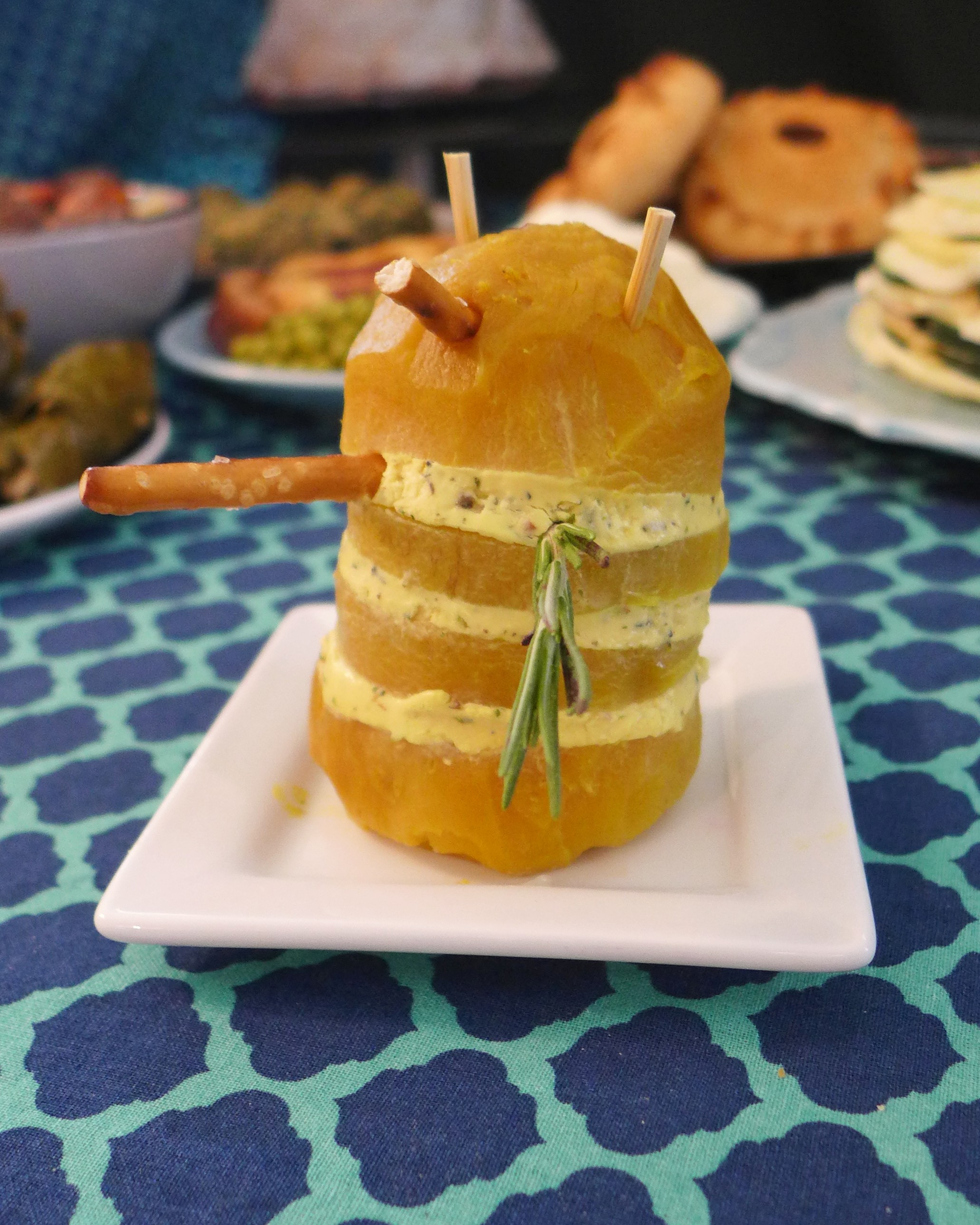 Desserts usually steal the spotlight at nerdy watch parties, but there are only so many blue cakes and varieties of custard you can eat before you start to crave something savory.

Luckily for you, it’s shockingly easy to EX-TER-MI-NATE your grown-up cravings with a $10 army of deliciously homicidal cyborgs. Beet your hunger with these cheap and easy Dalek Goat Cheese Stacks.

At my local Texan HEB, half a dozen beets, a packet of fresh rosemary sprigs, and a couple tubes of flavored goat cheese cost me around $10. When assembled, they transform into a tidy little army of six inch tall murderous cyborgs.

Up the street, a beet and goat cheese appetizer will cost me around $14 for a scant 6-8 bites – and they don’t even shape them like Daleks! The markup and combination of retro and special occasion ingredients make this a Very Grown Up and expensive looking appetizer. Your friends don’t need to know it cost you less than a bag of fish frozen fingers and can of custard powder.

Beets are a divisive vegetable. A  lot of people look at them and say, “Ewww. If I wanted to eat something that looked like gore I’d audition to be an extra on The Walking Dead.”

Okay, that really only applies to people who live in Georgia.

The rest of us are divided into two camps. On one side you have grandmas, immigrants, and the sort of people who buy Community Farm Alliance boxes of random locally grown vegetables. We all eyeball one another a little suspiciously at our top secret beet roasting parties, but then the grannies spike the punch, the Russians jokingly claim credit for the fun juice, and things get a little crazy. When it’s all over, we have to burn our clothes.

You wish you were invited.

Most readers aren’t so cool. You’ve only ever seen beets as that wobbling canned horror your dad accidentally grabbed instead of cranberry sauce three Thanksgivings ago. They’re a joke vegetable, right? Like Evolution’s whoopie cushion. Why else would handling them make your kitchen look like the “after” scene on CSI: Sunndale?

The grannies, Russians, and I see chewing on something disturbingly fleshy while flashing the occasional bloody grin as a Beet’s third best feature, but luckily for you, farmers have bred a well tamed golden beet with a milder flavor and less likelihood of making you look like a serial killer. Luckily for you, the gold beets are cheap, tasty, and only require a couple minutes knife work to transform them from an expensive trendy restaurant appetizer to an adorably miniature murder machine.

KILL IT WITH FIRE

The first step is roasting your beets. Luckily, this is both easy and forgiving.

When picking them out, be the creepy person who takes your round metal cookie cutter to the store with you. I like one that’s about 2 – 2 ¼ inches wide. Find beets that are a hair wider than your cookie cutter and about 3 times as tall. Ideally, you want them to have a nicely rounded bottom instead of ending with a sharply pointy tail. The more dome-shaped it is (y’know, like a Dalek’s head) the less work you have to do later.

Preheat your oven to 400F while you scrub any excess dirt off the beets and trim away any greens left on the top. If you’re baking other things ranging from 375 – 425F, you can throw your beets in there with them. Like I said – they’re forgiving. They’ll bake a little slower at a lower temperature and a little faster at a higher one – so if you go hot, check them more often, especially the closer you get to the end.

Once you’ve settled on a temperature and your proto-Dalek’s potential oven companions, rub about 1 tbsp olive oil into the skin of each beet before wrapping it loosely in foil. This keeps it nicely moist and tender while cooking.

Put all your beets on a baking sheet lined with even more foil to catch any drips – especially important if you’re brave enough to use red beets!) and roast them for 40-60 minutes. So far, all you’ve had to do here is turn on an oven and wrap a veggie in foil. It’s not rocket science. The only hard part is checking every 15 minutes.

To check your beets for doneness, shove in a skewer. If it slides easily through the flesh, your beet is done. If it meets any resistance, it goes back in the oven. Make sure to flip it over when you put it back for even roasting.

You’ll know you properly roasted the beets if the skin falls right off of them like a zombie caught on an escalator. This part is actually pretty fun. As soon as you take the beets out of your oven, open the foil packets so they can start cooling. Once you can handle them with your bare hands, grab a couple of paper towels. When you scrub the rough side of the paper towels against the beets, their skin should rub right off like some kind of horrible vegetable necromancy.

Once all your beets are naked, it’s time to assemble your angry cyborg army.

I didn’t just tell you to buy five beets because you’ll mess one up. (You will.) It’s also to provide extra layers in case some of your beets are too short to be properly intimidating Daleks.

First, grab your sturdy metal cookie cutter. Position it over the most rounded, dome like part of the beet’s root end and push down. You should now have a vaguely phallic tube of beet plus some scrappy extra bits.

Grab a paring knife and trim the Dalek’s head until it transforms into a nicely rounded dome. Do this for all five beets, then pick the prettiest four as your future cyborg army.

Make your first incision about 2 – 21/2 inches down in order to separate the head from the body. You want the base to be about the same size. In an ideal world, that would leave you with just enough flesh in the middle for two thin stripes, but mother nature is rarely that kind. Cut slices from your 5th beet tube to fill in any gaps.

You should now have a wide base that’s flat on top and bottom, two interior fleshy slices, and a domed head.

Spread about 1 tbsp of goat cheese on top of your base. Add the first fleshy body slice, another wad of goat cheese, the second slice, a third wad of goat cheese, and finally, the head. As you go, smooth the cheese with your fingers so it’s evenly distributed. Don’t worry if some peeks out the edges. We’ll deal with that in a second.

All members of your Dalek Army probably won’t stay stand proudly without support. I’ve tried. Luckily, the same skewers you use to keep them upright double as the Dalek’s earbuds.

My Daleks were about six inches tall, but yours may vary. The best way to make sure your earbuds are the right height is to hold them next to your Daleks, pointy end down, and decide how tall you want your ears to be. Break the bamboo at your chosen height. Break the remainder of the bamboo skewer to match (or cut it neatly, if that’s what you’re into.)

Wrap your fist around the tiny soldier, taking care to keep the layers as separate as possible, and jab the pointy ends of the skewers through it’s body. The goat cheese will bulge a little from the pressure. Wipe it away with your fingers. (Or wipe it away with one of the beet scraps and pop that right in your mouth.)

To make your eyestalk, snap a pretzel stick in half. Gently push the rounded end into the Dalek’s head. You want the broken end sticking out so there’s a color contrast between the outside and inside.

Do the opposite with the other half. Press the broken side into the top layer of goat cheese so the smooth end is sticking out as one arm. Strip the leaves off one end of a small, sturdy rosemary sprig and push it into the cheese to make the whisk arm.

To make your Dalek’s gluten-free, you can substitute anything from coffee stirrers to narrow asparagus stalks for the eye and arms.

When your Dalek army is done terrorizing a TARDIS cake and getting into blinking contests with Weeping Angel action figures, cut them in half, top to bottom. Each Dalek makes two savory servings. If any of your friends is the sort who always has a satsuma in his pocket, feel free to serve with orange slices for a little extra flavor oomph.

Pre-order Dining With the Doctor: Regenerated now for 1 recipe from every episode of series 1-8 plus chapters for fish fingers and custard, cocktails, and special surprises for the 50th anniversary – over 180 original Doctor Who recipes!

Preview these tasty morsels from Dining With the Doctor: Regenerated – now available for pre-order – and come back every week between now and the winter holiday season for a new preview recipe.