Make your very own Deadpool sushi! Don’t be intimidated by hundreds of years of Japanese tradition. This recipe is is as mindlessly simple and fun as Deadpool himself.

Grab half a cup of sushi rice. If you don’t happen to have any sitting around, use the recipe below. I apologize in advance for how much delicious rice you’re about to consume. You can pretend it’s healthy by telling everyone it’s gluten free.

Now that you have two unadorned orbs sitting on your plate, it’s time to frame them. Slice your sushi grade tuna into long strips no more than 1/8 inch thick. Now, you may think you can save a few bucks by getting some random frozen fish from the grocery store. YOU ARE WRONG. Sushi grade tuna has been lovingly handled by zombie pirate fisherman who understand the importance of only eating the freshest raw fish. The rest of the stuff in your store was mangled by mere mortal human hands, covered in bacteria and indifference. It’s only safe to eat if it’s been properly cooked. Only buy the highest quality raw flesh.

So now you have your two blank rice eyes and your thin strips of raw tuna. Flatten the eyes and wrap a few strips of tuna around the exterior edges, like framing your eyes inside a socket.

Now push the eyes together and wrap more tuna around the exterior, framing the eyes within a face. A blank, judgmental face waiting for the finishing touch.

Cut your nori into two ovals the same size as the exposed white of Deadpool’s eyes. Lay it on top of the rice without overlapping the tuna. It’s close, yes. You only need one last touch. Use your sharpest knife to pierce tiny pupils into the nori.

Step back and admire your handiwork. Unlike Deadpool himself, that’s good enough to eat. The real question is whether you’re willing to share.

Serve it on a dark, bloody puddle of Teriyaki laced with sweet Thai chili sauce. 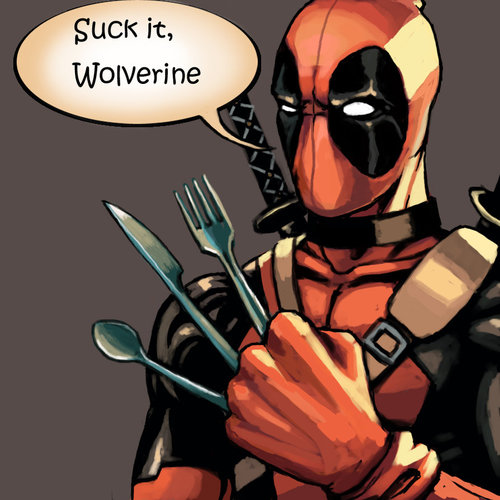 Let’s be honest. Most of us could shovel this carby delight straight into our mouth holes without needing any pesky fish or veggies. It’s evil demon rice magic, which is probably why it’s so popular. Evil demons throw the best parties.

Start by dumping all your rice in a bowl full of cool water. Use your fingers like a whisk. You want to really harass each individual grain. Once you get bored, pour off all the water.

Look at that. Your rice is still dirty. You may not be able to see it with your weak human eyes, but trust me. Deep inside, the rice needs another beating. Fill it up with more cool water and run your fingers through the grains. Make sure each and every one of them knows that you’re watching it. You know what it did. You know why it deserves this. Now pour off the water again.

Repeat the process a third time. By now, your rice should be almost translucent with fear.

Pour your frightened rice and 2 cups of water into a medium saucepan. Crank that sucker up to a high heat and bring it to a boil. Once the water boils, switch the heat down to low and put a lid on that pan. Let it cook for 15 minutes. Don’t check it. If you do, you’ll interrupt the rituals going on within the purified rice and break the magic. You must have faith.

After 15 minutes, take the rice off the heat. Let it sit lidded and unharassed for another 10 minutes.

While impatiently waiting for the rice to cook, you can occupy yourself by mixing the sauce. Dump the rice wine vinegar, sugar, and salt into a microwave safe bowl and nuke it for 30-45 seconds. Give it a good stir to make sure the sugar and salt are melted.

Once your rice has cooked and rested, take off the lid and admire the fluffy white goodness within. Dump the rice into a large wood or glass mixing bowl. Drizzle the vinegar mix over your rice. Use a wood spoon or paddle to gently but thoroughly fold the rice so each and every grain is purified with the righteousness of tasty sauce. They’re not dirty anymore. The grains have had all impurities boiled out and are now reborn as sushi rice.

For just the right texture, drape a clean kitchen towel over your bowl and let the rice cool at room temperature before using it to make sushi. If you have that kind of patience, I admire you. Most people just shove a fist full straight into their faces while sloppily cursing themselves for not doubling the recipe. 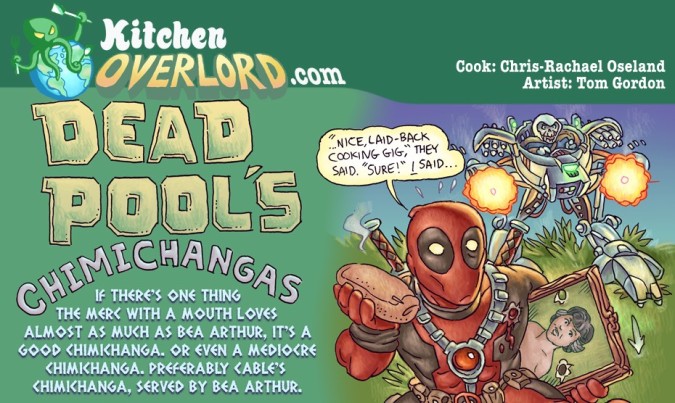 ...  whoever makes them will happen to have an excuse to slice Deadpool’s face into ribbons over and over again without him once ...

...  honor of Deadpool slicing his way into our screens and hearts this valentines day, Kitchen Overlord is posting a week of edible homages ... 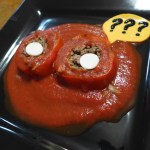 ...  worry. Eating his face won’t give you Deadpool’s powers, though that hasn’t stopped him from selling old scabs on ...  ...