If you’re at Dragon*Con, look for Chris-Rachael in her TARDIS dress to snag one of our limited edition free Kitchen Overlord posters. The response to the promotional posters has been so enthusiastic we’re having six printed up on nicer paper for sale this holiday season. Use the poll on the sidebar to vote for which Illustrated Recipes you’d like to see us offer. Meanwhile, enjoy this Whovian take on a historic recipe.

That beard. That swagger. Oh, Shakespeare. You’ve never been so sexy.

If you slipped into the TARDIS for Martha’s first journey back in time, you could not only enjoy the only production of Shakespeare’s “Love’s Labour’s Won,” but also a hearty slice of what would later be called a Shooter’s Sandwich. It’s a sort of cheap cheater’s version of a hearty meat pie made by people who didn’t have access to an oven. One dense slice would keep you full for the duration of a four hour long performance. For you historians, this is technically an Edwardian recipe. However, food historians agree that by the time a recipe was written down, it had usually been in use and circulation for decades, so there are good odds you’d find this served at theaters like the Globe. Groundlings needed some hearty fare for a day of mocking actors and pretending to flirt with boys in dresses. This would’ve been perfect.

Start by slicing off the top quarter of your hearty round loaf. Scoop out about ⅔ of the interior. You can pull the interior apart and let the scraps dry in order to make homemade croutons. Thinly slice your mushrooms, garlic, and leeks or onions. Melt your butter in a skillet and toss in your vegetables. You want to sauté them over a medium high heat until they’re reduced down to about half their previous bulk. Add the Worcestershire sauce and brandy or whiskey then give it a good stir. Let it continue to cook down while you prepare the steaks.

While your vegetables enjoy their drink, take a shot for yourself before rubbing your steaks down with a generous amount of salt and pepper. This part isn’t entirely period, since pepper would be a bit pricy in Shakespeare’s day, but in our modern, decadent era you can afford to live a little. Speaking of living a little, treat yourself to some nice, fatty ribeyes. If you use a really lean meat you’ll end up with an unpleasantly dry, tough sandwich. You want something with some real substance in this manly sandwich.

Rub a tiny amount of butter into the bottom of a hot skillet and sear your steaks for a couple of minutes on each side. You want to keep them nice and juicy for the sandwich, so don’t go overboard. Aim for medium rare to medium. While the steaks are still dripping and hot, tuck them into the hollowed out loaf of bread. You want to create a solid layer of meat across the bottom. If you’re feeling fancy, you can now smear the steaks with some horseradish or mustard for extra flavor. When you’re done, top the meat off with all your vegetables. Try to really cram them down inside. If you’d like, you can top the whole thing off with a thick layer of cheese.

Now put the lid back on your bread. It looks as innocent as a pretty young witch. You’d never imagine what’s really inside. If you want to give it some extra flair, use an exacto knife to cut out a giant DW or Seal of Rassilon from the nori and put it over the middle of the bread lid.

Wrap the sandwich in waxed paper and tie it loosely with butcher’s string. This is to keep everything in place so you don’t end up with a sandwich that’s all mushroom in one bite and all meat in the next. You need to keep it all in place because next, you’re going to crush it as thoroughly as the tenth Doctor crushes Martha’s heart. Flatten the wrapped sandwich under something heavy – the complete Yale Shakespeare is a good start. If you have bricks or cinderblocks lying about, you can pile them on top of a board. Put some real weight onto it. You’re about to crush the sandwich down into a hearty mock pie.

Let the sandwich sit under the weights, unrefrigerated, for at least 6 hours, preferably overnight. The end result should be a fantastically dense, room temperature sandwich When you’re ready to serve it, cut the sandwich into pie-like slices. A little goes a very long way. To add to the period feel, hire a cross dresser to serve it with apples and nuts.

You can find plenty of recipes for your Doctor Who viewing party in Dining With The Doctor: The Unauthorized Whovian Cookbook. 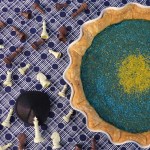 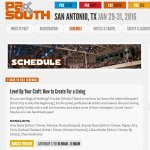 Don your cowboy hats, Viking helmets, and eye patches! It’s time to electrify your cold, snowy weekend with the warm comfort of a deceptively simple ...