When not stuffing your face with chimichangas and endless stacks of pancakes, you’ll want a few bites of something as sweet as Bea Arthur. In less than an hour, you can throw together these Deadpool inspired Red Velvet brownies with a sleeve of Oreos, bad intentions, and some staples you already have lurking in your pantry.

While your oven warms up, viciously attack your butter and brown sugar with the whirling blades of a hand mixer until the contents of your bowl are as light and fluffy as Deadpool’s brain.

Add the eggs one at a time. Rough the first one up a little. Once it’s sloppy and bleeding yolk all over the place, invite its friend to the party. Beat them senseless for another minute or so before adding your red food coloring and some kind of extract.

You’ve got a choice. You can either add vanilla extract (which will give you traditional chocolate flavored brownies, because the world is a dark and confusing place) or you can add a mix of cherry and almond extracts, which will give you cherry chocolate brownies. The vanilla tastes more “natural,” but hey, you’re adding so much red food coloring that you’re going to poop technicolor all day tomorrow regardless. Unless you’re using high end extract, odds are good that your vanilla flavoring is made from beaver anal glands, so why not embrace the full wonders cherry flavored purely chemical additives? 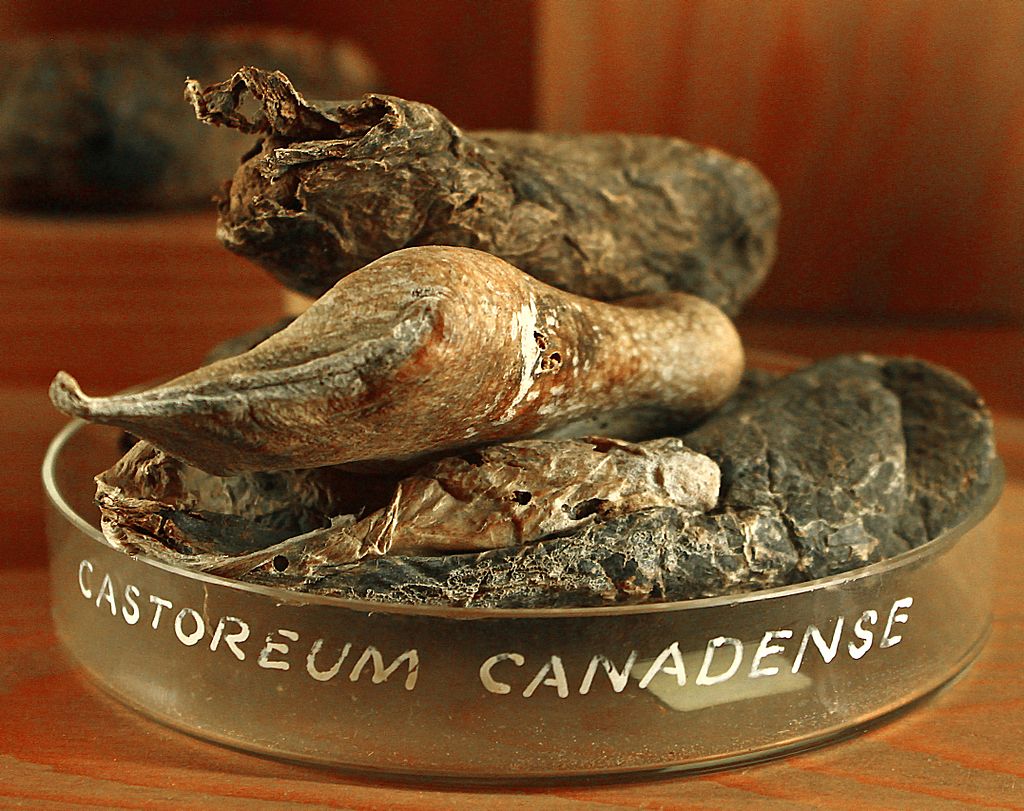 Regardless of how you flavor your brownies, keep beating the now disturbingly soupy mix for another minute until it looks like a reasonable stand-in for fake blood at your next Zombie Walk.

Sprinkle your AP flour on top of the bloody buttery mess. Now sprinkle the cocoa powder over it. Top that off with your kosher salt. If you were a good person, you would’ve whisked all three of these together in a separate bowl before mixing them into the bloody butter, but since there’s no baking powder or soda, let’s save a little washing by being lazy.

Halfheartedly stir the powders around with your dirty beaters for a few seconds. Once you’re bored of that, turn the mixer on, set it to low, and let the blades thunk away as they stiffen up the batter.

The whole mix will turn a much darker red than you like. Don’t panic. If the batter looks fire engine red at this stage, the final brownies will come out a lot pinker than you intended.

Grab a stick of butter and generously lube your favorite bread pan. The straighter it’s sides the better. Mine was 5 inches wide by 10 inches long, but really, don’t stress. All you need is a loaf pan wide enough to fit two rows of Oreo cookies. Use whatever you’ve got. Some of you will want to bake these in a 9×9 square pan like normal brownies, but they’re meant to be thick and chewy. If you spread them too thin, you won’t have enough batter to make a reasonable face.

Once your loaf pan is all lubed up and ready for action, spread half your brownie batter in the bottom. Moisten your hands and ease them over the surface, smoothing everything out and preparing it for what comes next.

Arrange your Oreos in two rows down the middle. If there’s a little room left on the sides, that’s fine. Use however many you need to fill the length of the pan.

Very carefully top the cookies with the rest of the batter. Try not to push too hard or else you’ll create odd expressions on Deadpool’s face when you cut into the brownies. Once more, moisten your fingers and oh so carefully smooth out the top.

Bake Deadpool’s Dubious Red Velvet Brownies at 350F for 35-40 minutes, or until a toothpick inserted in the middle comes out mostly clean. (A hint of stickiness is okay, depending on how chewy you like your brownies.)

As soon as you take the pan out of the oven, loosen the sides with a silicone spatula. Now back away from the counter and let the pan cool completely. Sure, you want to know what’s inside, we all do, but if you cut into it now, you’ll drag ugly crumbs all over his eyes and rip the fabric of his suit in ways that are just awkward rather than strategically ab-intensive and oddly sexual. Let the brownies cool down after their epic battle with the oven. 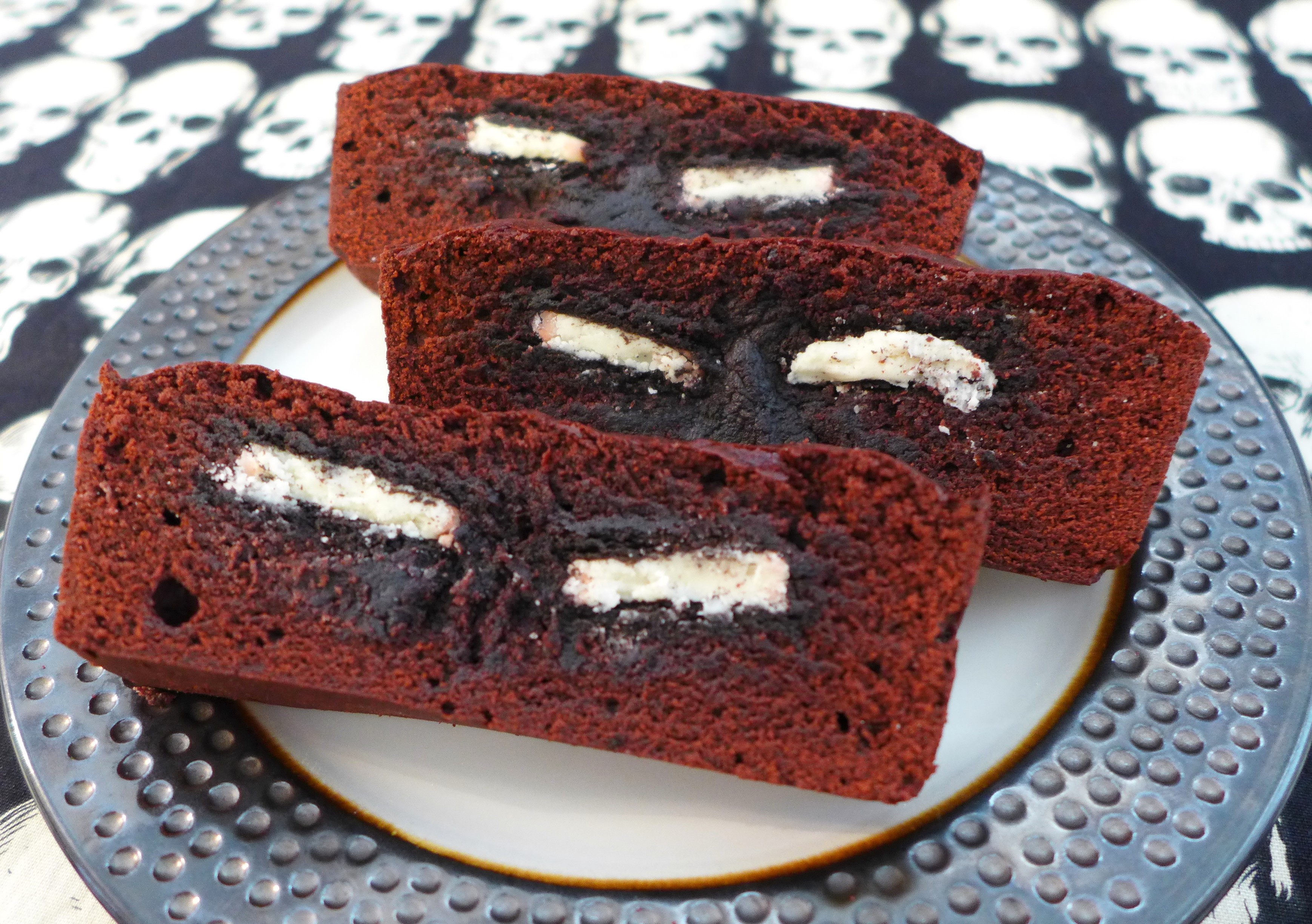 You now have two options. My preference is to cut them length-wise, which gives you a wide, cross section of Deadpool’s eyes with a wrinkly bit of gooey batter in the middle you can mold into a nose. Depending on the length of your pan, this will get you 8-10 intensely staring brownies.

If you have more people to feed or are better with a knife, you can also cut the brownies into squares, though you’ll have some spare scraps that look like extra bits left over after the end of the Weapon X project as well as one one eyed rejects that might’ve been part of earlier trials. I find the wide brownies more forgiving, but hey, maybe you’re into cruel cubism. I’m not here to judge.