Off Worlders may only see you crunching dry spice sticks for dessert, but back in my home sietch, we finish celebratory meals with a moist, delicate confection that even the water-rich Harkonnens would envy.

Sandworms Swimming Near A Spice Patch

After John Scalzi sent hordes of Fremen to my sietch with his wormsign, the people rose up with one voice, demanding one answer. What’s in the sandworm pie posed alongside your spice stuffed sandworm bread? Since you asked so nicely, I even included vegan, paleo, and gluten free variations so nearly anyone can share your love of Shai’Hulud.

If a friendly Naib surprises you with an unexpected visit to your sietch, surprise him back by getting this incredibly forgiving homage to the Great Maker onto your table in less than an hour.

Begin by opening a can of pears and finding the two most potentially sandworm shaped halves. You want a good rise in the back and a tapered tail for the best effect. Set them on a couple of paper towels to dry while you prepare the pastry.

Unfold the thawed puff pastry and strategically tug until it covers the interior of a 14×5 inch tart pan. (Honestly, you can use a standard 9 inch pie pan, but it won’t look as dramatic.)

Beat together the room temperature butter and white sugar they’re as fluffy as loose sand around a mining ‘thropter. Add in the almond flour, white flour, Arrakeen spice (or substitute of your choice), cinnamon, and kosher salt. Keep mixing until it starts to feel like sand-crete.

Loosen that up by adding the egg, vanilla, and bourbon. Keep beating until it all merges into a pliable paste.

Gently press your almond paste into the puff pastry lined tart pan. It won’t seem full enough. Don’t worry – the filling will puff up during cooking.

Remember the sugar and spice mix you made earlier? Divide it in half. Anoint both sides of your chosen pears with half the mix.

Cutting at a slight diagonal, use your crysknife to thinly cut each pear half into a dozen smaller slices. Lay your palm flat on top of the sliced pear and press down lightly in the direction of the cuts. Your pear will spread out in neat, even, worm-like ridges.

To best keep the shape, grab a spatula and carefully slide it under the pear. Slide the pear off the spatula and into your almond desert, taking care to gently tuck any errant ridges back into place.

Once your dueling worms are in place, carefully sprinkle the remainder of your sugar and spice mix on top of the almond creme.

Bake uncovered at 350F for 30-35 minutes, or until the top is golden brown and the middle no longer wobbles. Let it cool for 10-15 minutes before removing the tart from the pan and cutting it into slices.

As you can see, I had a very Fremen inspired Thanksgiving. Clever readers can guess the theme of my next cookbook by the pie-fecta that accompanied my sandworms to the festivities. Fun fact – one of them catches fire. On purpose.

Substitute a purchased gluten free pie crust for the puff pastry. (Or leave off the crust entirely. You’ll still have some nice sandworm pears swimming in almond custard.)

After creaming the sugar and butter together, grab another bowl. Whisk together the almond flour, cornstarch, spice mix, cinnamon, and salt. Once those are well blended, add them to the sugary butter. From there on, follow along with the rest of the directions.

You already knew this, but no crust for you.

Substitute 8 tbsp vegan butter such as Earth Balance or Smart Balance. Increase the almond flour by 2 tbsp. Double all the spices. 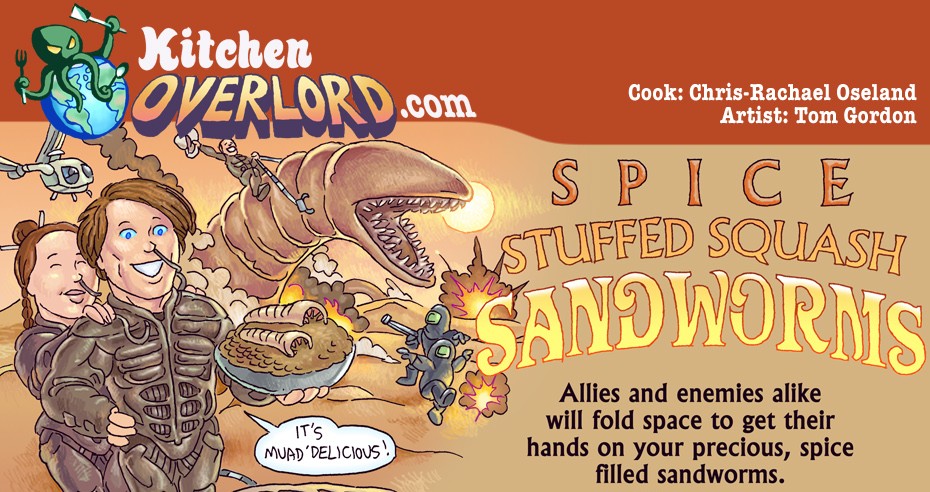 ...  love of David Lynch’s 1984 science fiction epic, Dune. (This is almost unrelated to my entirely rational and well thought ...