Hey, Hoopy Froods! In honor of Towel Day, we bring you something more to snack on than a bag of peanuts and cup of not-tea while you curl up with your favorite towel and a copy of the Hitchhiker’s Guide to the Galaxy.

Boil water. I know the concept of forcibly changing a liquid into a gas by adding heat is terrifying, but I have faith that you’ll use your power responsibly.

Take the pan off the heat. Add the chicken breasts. Cover and let poach for 25 minutes.

Remove chicken and shred it with two forks.

Gently press both sides of the crescent dough into a clean towel for texture.

Put 2-3 tbsp shredded chicken and ½ tbsp bbq sauce in the middle of each square.

Pull all 4 corners together. Pinch like you’re making a crab rangoon.* Or a badly folded towel from the bottom of your linen closet.

Bake for 11-12 minutes or until your towels are golden brown and look like they spent too much time in a tanning bed before lying about a vacation in Spain.

Serve with peanuts, in case you need to go through a matter transference beam, and a cup of the healthy, nutritious poaching liquid, which now tastes almost, but not quite, entirely unlike tea.

* In case you don’t have a kitchen, if you suck on all four corners of your hitchhiker towel at once it will taste like bbq. 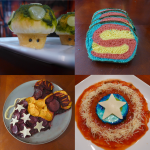 2013 was a great year here at the lair. We published over 200 original geek recipes, including one illustrated recipe poster each week. Rather than ma ...