Sam, Dean, I *know* he deserves it this time, but you can’t pluck all of the trickster’s feathers. I’ve got nothing against a little torture between friends, but he whines so much when he’s bald. For a little cathartic release, I made an effigy of his wings you can rip apart to eat after dinner. It’s “just dessert.”

Keep working on the human humor.

Start by resurrecting the yeast. It’s not as impressive as resurrecting a human. That’s never made sense to me. People can’t go into suspended animation. Really, you should have more respect for any creature that’s born in beer and can nap for years if there’s nothing interesting going on.

To wake the yeast back up, mix a tablespoon of yeast, a tablespoon of white sugar, and 1 ¼ cups very warm water. Whisk it together until all the lumpy bits are completely dissolved into a primordial sludge then give it 10 minutes to get its bearings. You’ll know it’s ready for action when the muddy sludge bubbles up to about twice its original volume.

While the yeast slaps its alarm clock and groggily staggers back to consciousness, melt your butter in the microwave. You want it sloshy enough to party with the rest of the liquid ingredients, but cool enough it won’t murder your newly resurrected yeast.

Meanwhile, mix the melted butter and vanilla extract. In another bowl, mix your cinnamon, cardamom, nutmeg, and brown sugar. That killed one minute. Find something else to do for the next nine.

Once the yeast is awake and the butter cooled, dump your honey, eggs, orange juice, veggie oil, melted butter, and salt into a stand mixer (or an epic huge bowl) and mix it all up. When it’s a smooth yet muddy mess, add in your flour 1 cup at a time, mixing between each addition. Once you have enough in there to make a stiff but still tacky dough, either attach the dough hook of your stand mixer and let the machine do all the work for the next 6-8 minutes or slap the disturbingly fleshy mass onto a lightly floured counter and knead it by hand for the next 10 minutes. Either way, you should end up with a smooth, light dough.

Drop your proto-wings in a lightly greased bowl (or just leave the dough in the bowl of your stand mixer if you’re feeling lazy). Cover the dough with a towel and walk away for the next hour. When you come back, it should have doubled in size. If it’s lethargic, wait a little longer. Sometimes, size does matter.

You’ve wanted to do this for so long. When your dough has risen to the occasion, take one look at it, laugh, and punch it. Hard. Or soft. Really, whatever you’re in the mood for, so long as it wilts at your touch.

Grab your sharpest knife. It’s time to give this angel his wings.

Cut your dough in half. Grab your beat-down stick or rolling pin and flatten each half into a large oval four times the size of your final wings.

Smear the middle of each oval with your melted vanilla-scented butter. Make sure to leave at least 2 inches around the edges. Don’t worry. They’ll get extra special treatment later.

Scoop half of your brown sugar and spice mix onto each oval and spread it over the butter.

Fold each oval in half horizontally. No, it’s not a wing yet. Now fold it vertically, but make sure it doesn’t quite overlap neatly. Angels, like onions, have layers. You want an inch or so of bottom wing to show underneath the top wing.

Once you have a matching pair of rough, rounded triangles, carefully lift the top wing and cut 2 – 2 ½ inch slices into the bottom to create a layer of feathers. Once those are done, carefully lay your top wing back in place and cut feathers in into the edges as well. Try to position your top cuts in between the bottom cuts so you’ll have the most feathers showing after the wings bake.

Angel wings attach at the shoulder blade. To make the attachment joint, go to your nice, neat triangular corner (diagonally opposite from the feather cuts) and grab a handful of wing. Bunch it up in your hand so it it’s about the size of a smallish doorknob.

Fluff any stray feathers and tug the upper tips until they’re perky.

Let the wings fill out and grow for half an hour. While you’re waiting, whisk together your egg, vanilla, and water. You don’t want to let this dough rise too much or else your wings will look bloated and diseased in a way only Crowley would find sexy.

Just before you pop the wings into the oven, use a pastry brush to coat them with your eggy, vanilla mix. This will ensure they come out of the oven a shiny golden brown matching Gabriel’s proud plumage.

Bake the pallid wings at 350F for 25-30 minutes (325F on a dark pan). You’ll know they’re ready when the top is a rich gold and both the top and bottom sound hollow when tapped. Sure, Gabriel is a horn player, but he appreciates a good drum section.

Let the wings cool for at least 15-20 minutes before ripping off Gabriel’s feathers and stuffing them in your mouth. If the wings connective tissue bled out excessively during baking, use a cookie cutter to make neat round discs of spiced sugary goodness which you can either use to decorate your platter of wings or crumble up and sprinkle on as a topping for folks who prefer a little added sweetness in their “just desserts.”

Garnish with extra candy – or, if you need Dean’s attention, a whole pie.

...  spice flavor to infuse into the juice. No, you can’t just use ground spices, you imbeciles. They’ll turn the pie a funky ... 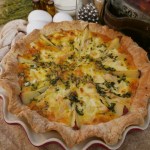 ...  is as forgiving as Castiel discovering the Winchesters just ended the damn world again. Want to use up more chicken? Go for it. ...