Betty Ross tells me baking is soothing. After all, even if I screw it up, there’s nothing to get angry about. I can just go buy a loaf of bread. Either way, we’ll still have dinner. Proving myself in the kitchen is a way to prove I can spend time in a lab again without my temper causing major property damage.

To start out, I’ll just mix this yeast and warm water. It’s like I’m resurrecting a long dead alien species just to help me out with this project. Wait, that’s really narcissistic. If that yeast knew what I’d done, there’s no way it’d help me. This is a bad idea. I can’t be responsible for an entire colony. Who knows what they really want. No. Deep breaths. Bakers do this every day. Fifteen minutes of meditation should be enough.

Look at that. It’s a healthy yeast colony. Oh, man. I can do this. I’m just going to add the orange juice, vegetable oil, lemon rind, honey, sage, and salt then give it a good stir. Now that the mix is looking good, I’ll carefully extract ½ cup of the yeast soup and pour that into the mixing bowl full of purple dye. All it needs now is 1 ¼ cups of bread flour and some elbow grease and it’ll magically turn into dough. I’m making something good. Something productive. See, nothing to stress out over.

Okay, as much as I hate this color, the green dye goes into the rest of the yeast mix. Stir it in, then add 2 ¼ cups of flour, maybe a little more if it’s not doughy enough. I’ll let Betty’s stand mixer knead it away with a dough hook for the next 6-8 minutes while I go knead the purple dough by hand.

Why purple? Seriously, I have no memory of stockpiling purple sweatpants at Wal-Mart. Does he get them on Amazon just to piss me off? I’ve got a closet full of broken keyboards. Has he bribed some of the Avengers to go shopping for him? I bet Hawkeye does it. Hell, I could see that douche sewing purple pants from scratch while he’s making arrow cozies and pretending he has an actual super power. That poser pisses me off.

No. Deep breaths. Calming breaths. We’re all team players here, just like me and the yeast, playing on team Bread. Cover up this dough and walk away for an hour. You can do this, Bruce. I’ve spritzed a bread pan with non-stick spray. Now is the hard part. I don’t punch it. I just, nudge. Nudge hard. Not aggressively, or anything. Ignore the recipe where it says I’m punching down the dough. That’s not really what’s going on. I’m just deflating a gasbag. It’s no different than squashing Reed Richards until he’s the size of a baseball. God, that would feel good.

Look, just concentrate on turning the purple dough into a rectangle the same width as the bottom of the pan. Lay it in there and shape the green dough so it lays comfortably on top, then press it down just a little. Gently this time. No smashing.

Okay. This is going well. I’m going to go lie down for another hour. Relax. Don’t think about how many times Richards has stolen my work and claimed it was just something that occurred to him in the middle of a crisis. Sure, Reed. You get your best ideas during a “crisis” where I’m calmly working in the lab until you burst in and start screaming. The next thing I know, Peter Parker is photographing me ripping up signposts while Reed is busy stealing notes and using his rubber ass to wipe my dry erase boards clean. God. Look at that dough. That disgusting green mound is twice the size it was when I left it. This was a bad idea. I should’ve made some challah, not something mean and green and growing. I have to make this stop. If I put it in the oven now, it won’t get any worse.

Alright. 35 minutes. 375F. I can do this. I bet Reed Richards can’t bake. I should tell him Sue gave me the recipe while she was cooking up a little something special for Namor. I bet that squid brain could pull off purple pants. Of course, he’d have to actually wear pants, first.

Deep breaths. The orange and sage smell amazing. Betty says those are calming scents. No matter what it looks like, I bet this bread would be just as good with a half teaspoon of lavender for the purple pants alongside the green sage. Calming scents. Aromatic bread. It’ll be great toasted at breakfast with a little butter and maybe a dab of honey. I can do this. The Hulk doesn’t control me. I can have a sense of humor about my own temper. Right? How did I let myself get talked into this? That’s it. This is the last time I’m drinking with Tony. I mean it this time. I should save a couple slices, though, just so I can tell that smug son of a bitch to eat my pants. 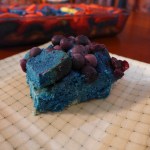