Let’s say, in a moment of drunken baking fervor, you decided to double the recipe for the Cyclops or Superman bread you found here on Kitchen Overlord. Now you have loaves upon loaves of primary colored, preservative-free carbs with a shelf life of 3 days.

The good news is bread freezes really well. If your loaves came out beautifully, just slice them up and save them for later. You can take out a couple slices whenever you really want to impress someone with a truly epic sandwich.

But what if your loaves weren’t quite so beautiful? Or, what if you finished up one gorgeous loaf then decided to throw all your random dough scraps into a bread pan because it was too much trouble to throw them into the trash? Luckily, I am a benevolent overlord, and thus have multiple solutions to your carby problems.

Yes, true believers! Lazy folk can just cut the bread into decorative salad cubes. Let the cut bread chunks dry out on a baking sheet for a day. The next night, drizzle them with the infused oil of your choice (I recommend basil or garlic), generously sprinkle them with kosher salt, and bake the whole mess at 400F for 10 minutes or until they’re lightly toasted. You have now created durable, tasty, tri-color croutons. I’d say they’re like comic lover’s kryptonite, but that’d be crossing the Marvel vs DC streams. Regardless, the croutons are a perfect way to encourage any little heroes in your life to eat their salads. Once the crunchy bread cubes cool, put them in a plastic zip top bag, squeeze out any air, and leave them in a cool, dark corner of your pantry for up to 6 months, though mine never last that long.

If, on the other hand, you’re the sort of geek who does brunch, the leftovers are your perfect opportunity to impress your fellow nerds with a cubist Mystique French Toast Casserole. 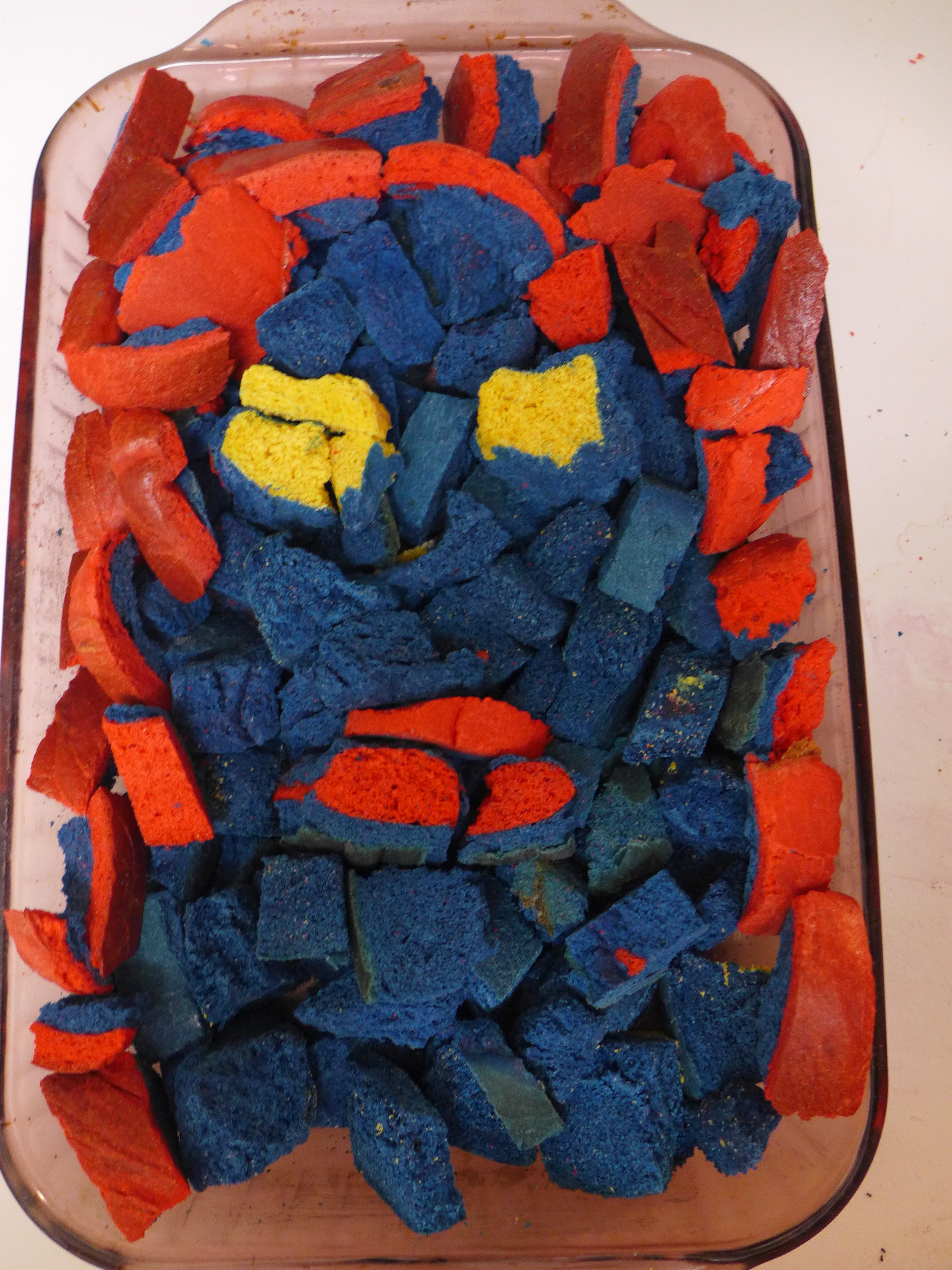 You’re a wreck. You spent yesterday in a frenzy of food coloring and yeast and now, you have so much bread to show for it. So. Much. Bread. It would fill you with a Hulk-like rage, but the bread is all blue, yellow, and red.

Get out a knife and cut it into chunks. Separate the chunks by color.

Fill most of the pan with bright blue bread cubes. Now, channel your inner Picasso and arrange the square red bread cubes around the perimeter until you’ve framed the blue face with a shock of red hair.

Use a couple large chunks of yellow dough to form her eyes.

Toss on a couple more thinner red slices for her lips.

If you’re feeling extra fancy, use the blueberries for shading, creating a hint of neck, cheekbones, and feminine shape. This also segregates the berry part of the casserole from the plain part so your anti-fruitarian diners can easily avoid any hint of nutritious content.

Once you’ve created a face from nothing more than bread scraps, you need a foundation to hold it together.

Whisk the eggs, milk, cinnamon, vanilla, sugar, and melted butter until they turn into a frothy mess. Pour the liquid evenly over the surface. If you’d like to play up Mystique’s colors, you can eliminate the cinnamon and vanilla in favor of 2 tbsp cherry extract.

Let the batter soak into the bread for at least 10 minutes. You don’t want to let this one soak overnight. If you do, the food coloring will turn it all into a kind of purple-ish mess. Don’t let it sit for more than half an hour before baking.

Sprinkle the brown sugar evenly over the entire surface, avoiding the eyes.

Serve warm, with extra syrupy sweetness on the side to lure your guests into a false sense of delicious security.

...  takes a real man to pull off all that purple. In honor of Marvel Comic’s Master of Magnetism, I present this edible homage to his ...