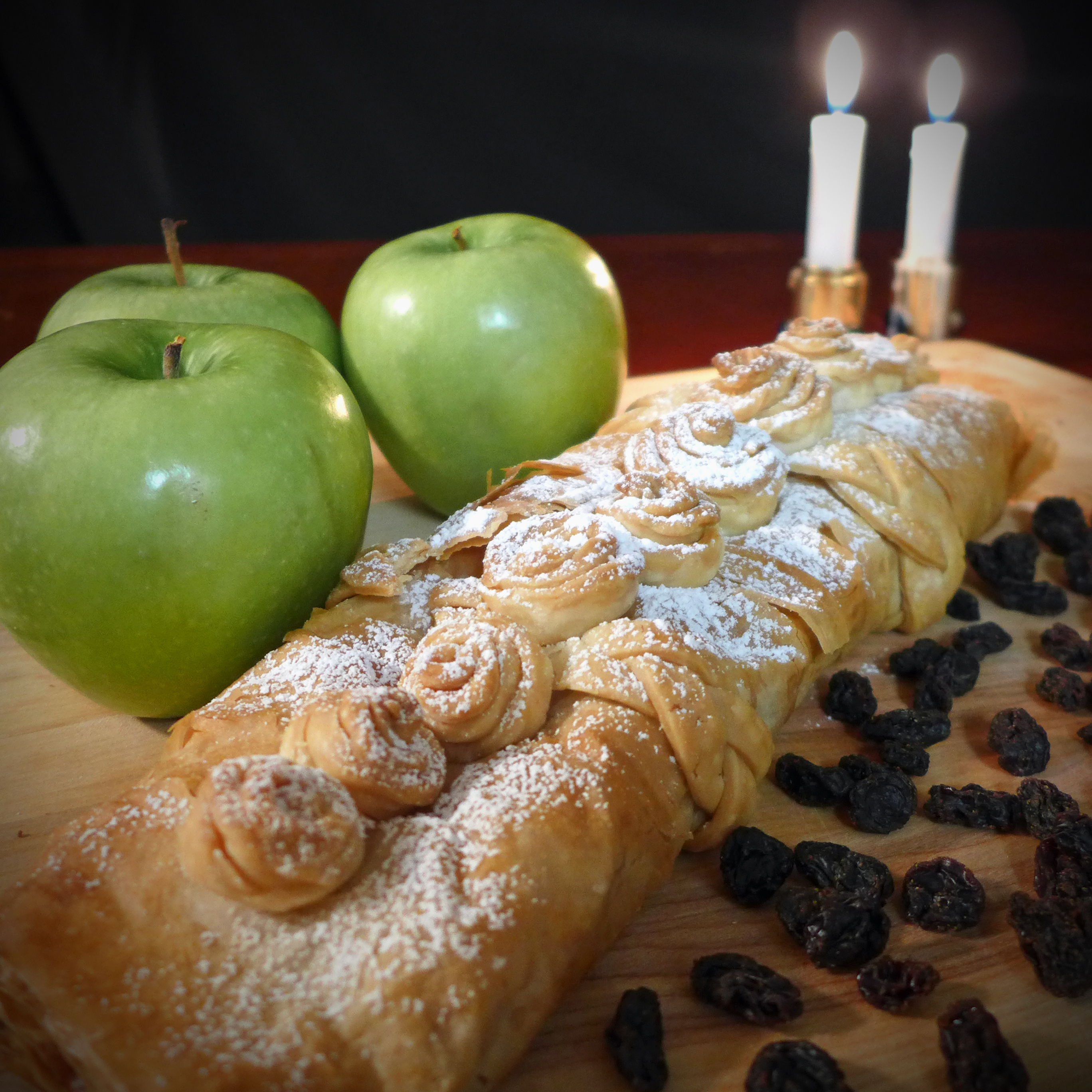 Pie or strudel, honey? Strudel it is!

Trying to recreate Queenie’s recipe using muggle technology is a bit of a challenge. It’s obvious that she’s using flaky phyllo sheets for the base, but for a no-maj, phyllo simply doesn’t braid up that neatly. On top of that, our glimpses of her spell don’t include any moisture inside the strudel.

My solution was to add both butter and a little apple juice to the inside while using both flaky phyllo as the base and far more cooperative pie crust for the braids and roses. Instead of pre-cooking the apples and baking quickly at a high temperature I opted for a long, slow bake so the pie crust and phyllo would both have a chance to turn properly golden brown.

To start, use your wand (or a muggle microwave) to bring your apple juice to a boil. Summon the raisins and let them enjoy a refreshing soak while you work.

It’s easiest to make the garnish first. In the clip, she decorates the strudel with six pastry roses. For ease and speed, I used a store bought refrigerated pie crust (though you’re welcome to use your favorite pie recipe).

Roll out your pie crust and cut it in half. You need three braids, so cut nine ½ inch strips starting at the widest point in the middle.

Now go to the outer edges. To make pie crust roses, simply cut a lazy, wavy line about 1 inch from the edge. Roll the pastry from one end to the other. When you turn it on it’s side, the wavy lines miraculously create the illusion of petals! Tap the bottom against your counter a couple times to flatten it out. Gently stretch the petals with your fingers. Keep this up until you have six roses you like.

Once you’re satisfied with the roses, carefully make three braids from the long strips you cut from the middle of the pie crust. Take care to keep the crust slices flat as you braid. Without a wand to aid you, they have a tendency to try to flip around and curl up in odd places if you aren’t stern with them.

When you’re satisfied with the decorations, set them aside and tackle the filling.

Zest your lemon into a large bowl. Squeeze in the juice. (After dinner, toss the remaining lemon and a few ice cubes into your sink’s disposal to clean it. A little water and a minute or so of power and it’ll smell fresh and summery.)

Peel your apples and cut them into roughly 1 ½ inch chunks. Toss the chunks into the lemon juice as you work so they’ll stay fresh.

Strain the raisins out of their plumping juice bath and add them to the apples. Sprinkle on the cinnamon, ginger powder, and salt and toss the contents of the bowl until all the fruit is coated. Cover that with the brown sugar and toss the cubes one more time.

Remember your apple juice? Whisk in 2 tsp of cornstarch until it’s completely smooth. Pour that over the apples and mix it in one more time.

If you don’t have a wand, you can fake the neatly rolled strudel effect with a sheet of parchment paper.

Melt half your butter. Lay out two sheets of phyllo dough so they’re mostly overlapping except for about 2 inches on each end. Use a pastry brush to lightly paint the phyllo with butter. Repeat the process until you run out of phyllo.

Look at your buttered phyllo and mentally break the length into thirds. You want to lay your filling down the middle third, leaving the two inches at each end uncovered. Dot the filling with your remaining butter.

If it needs any more gentle straightening, go right ahead.

Arrange the pie crust roses close together in a neat line extending from the middle braid outwards.

Use your remaining melted butter to paint the braids and roses.

Since I don’t know a spell for instantly baking a pastry after assembly, I had to resort to a 400F oven for 10 minutes.

After that first blast of heat, reduce the temperature and bake at 350F for another 15 minutes. The phyllo will brown up faster than the roses. Cover the outer edges with foil and continue baking for another 10-15 minutes, or until the entire pastry is a deep golden brown.

Sift powdered sugar over the the top and serve it to your favorite no-maj baker. 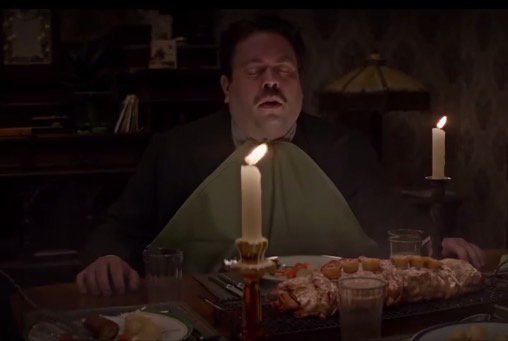