You’ll agree that, “Tahiti, it’s a magical place,” once you taste this SHIELD logo pull apart bread. If acquiring the Tahitian vanilla beans makes you angry enough to pull the feathers off an eagle, go ahead and substitute the more easily available Madagascar variety.

Mix the yeast, 1 tsp of sugar, and 1/2 cup warm water until the yeast dissolves. Cover it with a clean kitchen towel and walk away for 10 minutes. When you return, it should look like a Chitari gateway has opened allowing millions of alien creatures to pour through. Luckily, they’re microscopically tiny. No need to panic.

While you’re waiting, slit the Tahitian vanilla beans down the middle. Scoop out the interior seeds (also known as “vanilla caviar”) with a spoon. This is what gives the bread it’s magical flavor. If you want to really work some magic, fill a large mason jar with ordinary table sugar and stuff the vanilla bean leftovers inside. Let it sit there for a month, giving it a good shake every few days. The aromatic compounds will leak out, leaving you with expensive European “vanilla sugar,” which is great in everything from coffee to baked goods.

Back in the present, once the alien explosion has taken over your work bowl, add the vanilla caviar, kosher salt, cinnamon, molasses, granulated sugar, and melted butter. Whisk it all together until you end up with a dark, tarry slurry. If you want the loaf to be a darker black, go ahead and add in 1/4 to 1/2 tsp black food coloring.

Once it looks like a stygian darkness is about to crawl out of your work bowl, add the flour and work it in until you achieve a smooth, heavy dough. If you have a stand mixer, let it knead away for 6-8 minutes, or until the dough is smooth and glossy. If kneading by hand, keep it up for 10-12 minutes.

Cover the dough with a clean towel and let it rise for an hour, or until doubled in size.

Now comes the fun part. With nothing more than a knife, a sheet of parchment paper, and a little imagination, you’re about to transform perfectly tasty dough into a SHIELD logo in a few easy steps.

Punch down the dough and divide it in half. Yes, you’ll have enough for two logos or one logo and a small loaf of bread. Make two logos. If one doesn’t turn out, you’ll be forced to eat the whole thing, guilt free, in order to hide the evidence. 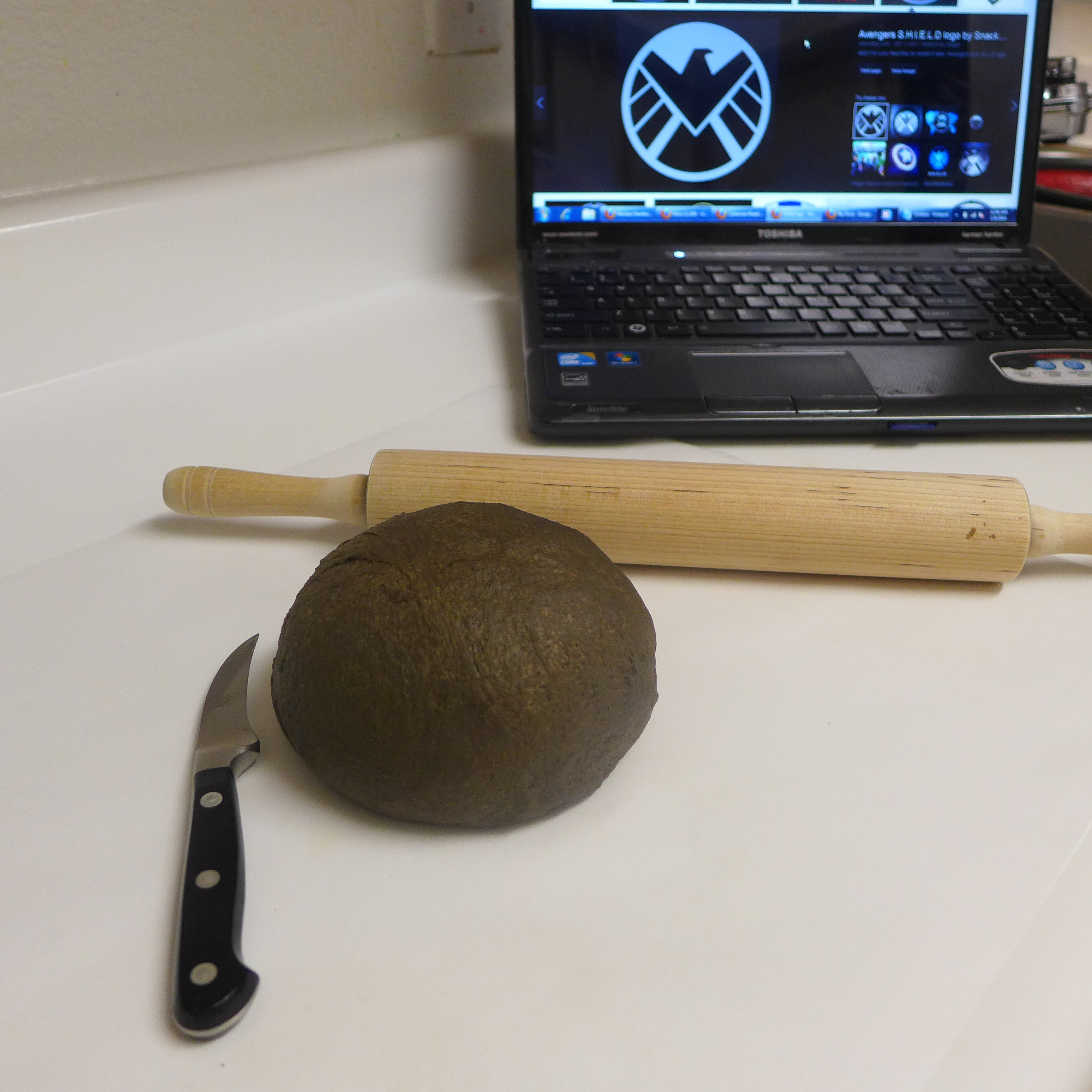 Spread out a sheet of parchment paper. Now roll out half the dough so it stretches to the edges. You want to end up with something about the size of a medium pizza crust. 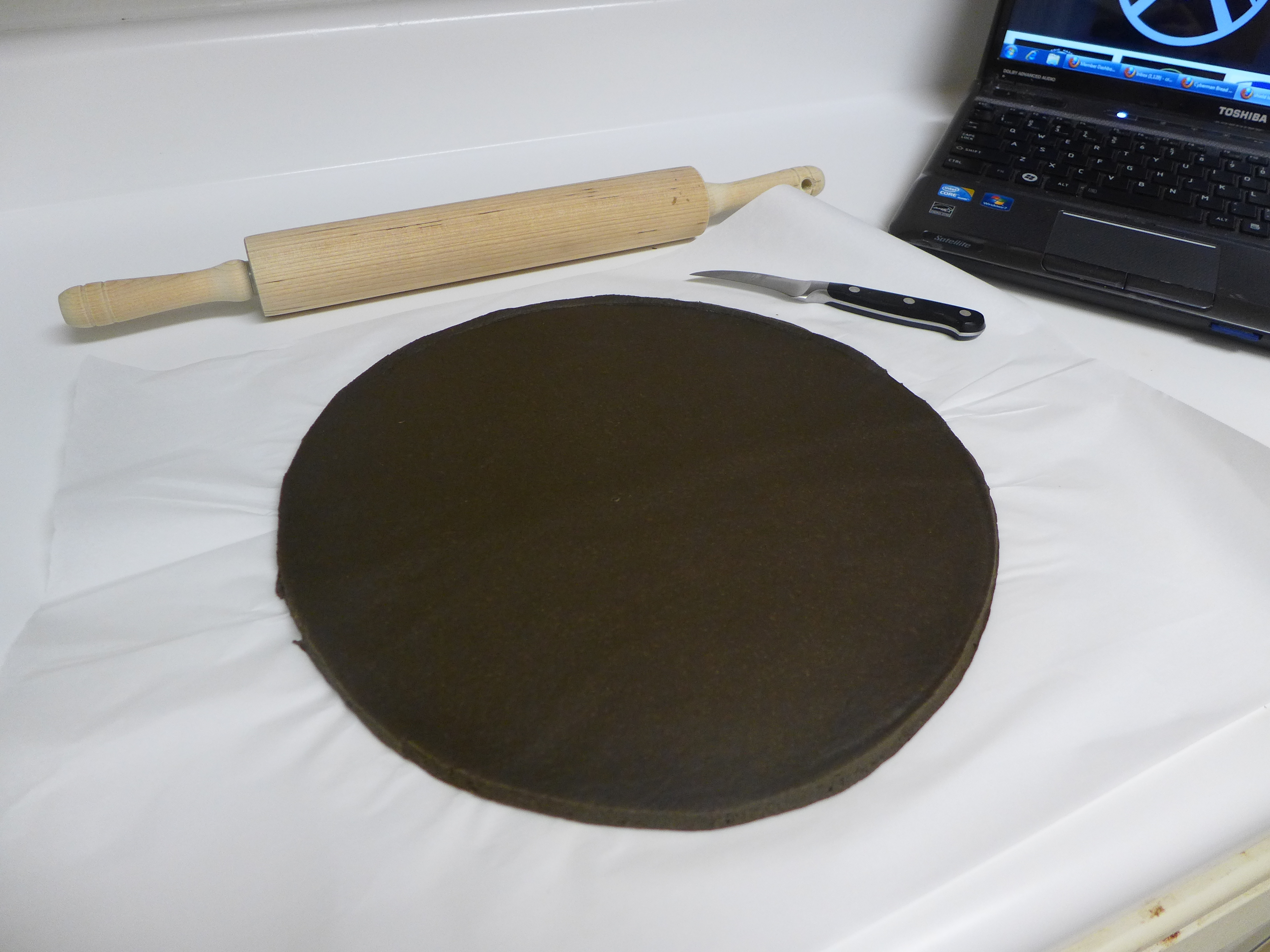 Cut away the edges so it’s nice and round.

The top half of your dough is the Eagle’s head. The bottom is it’s tail. Use a butterknife to press (but don’t cut through) a deep V in the top ⅔. This defines the area for the head and wings. 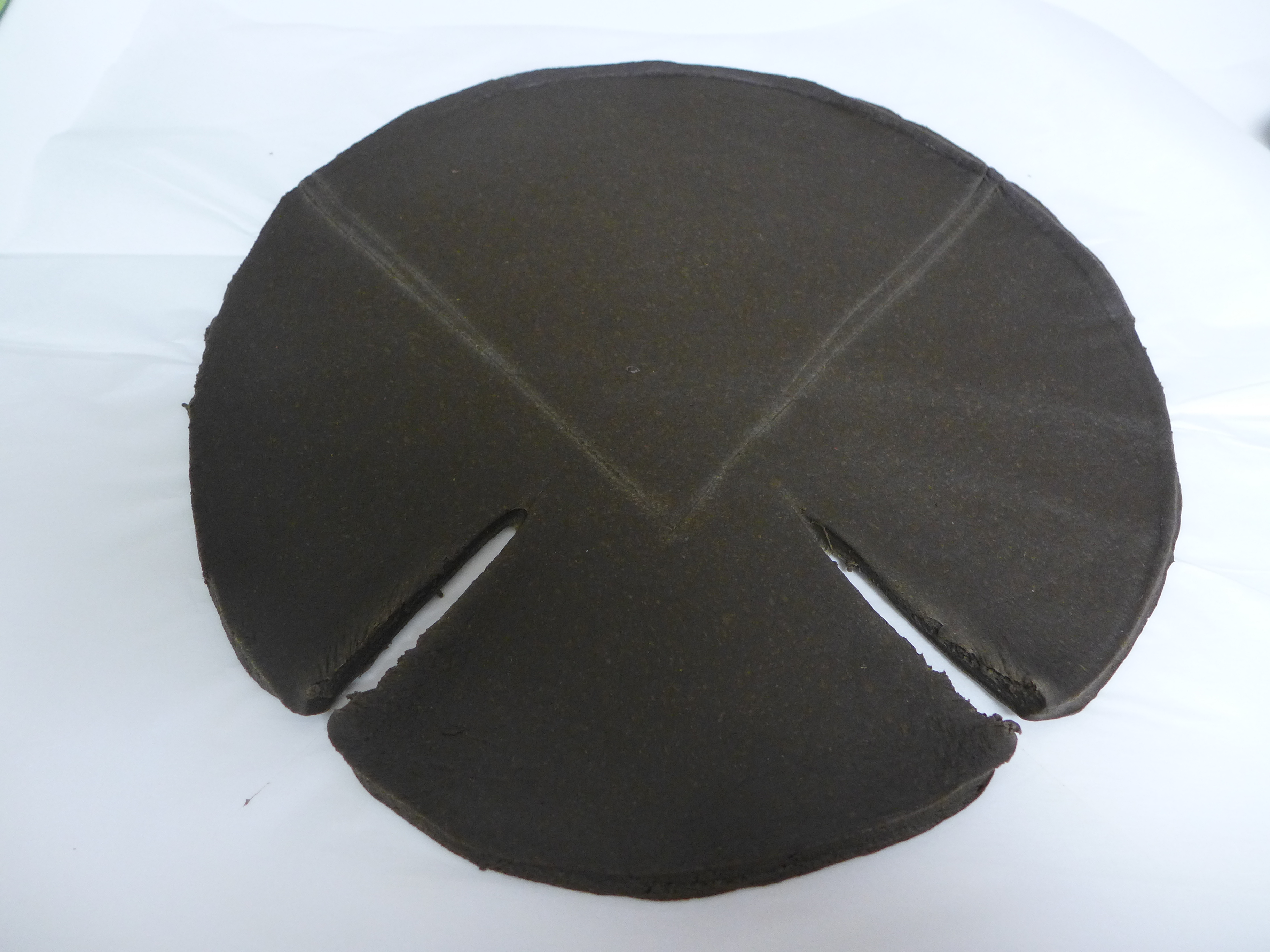 Use your knife to cut out the tail feathers. This time, slice all the way through. 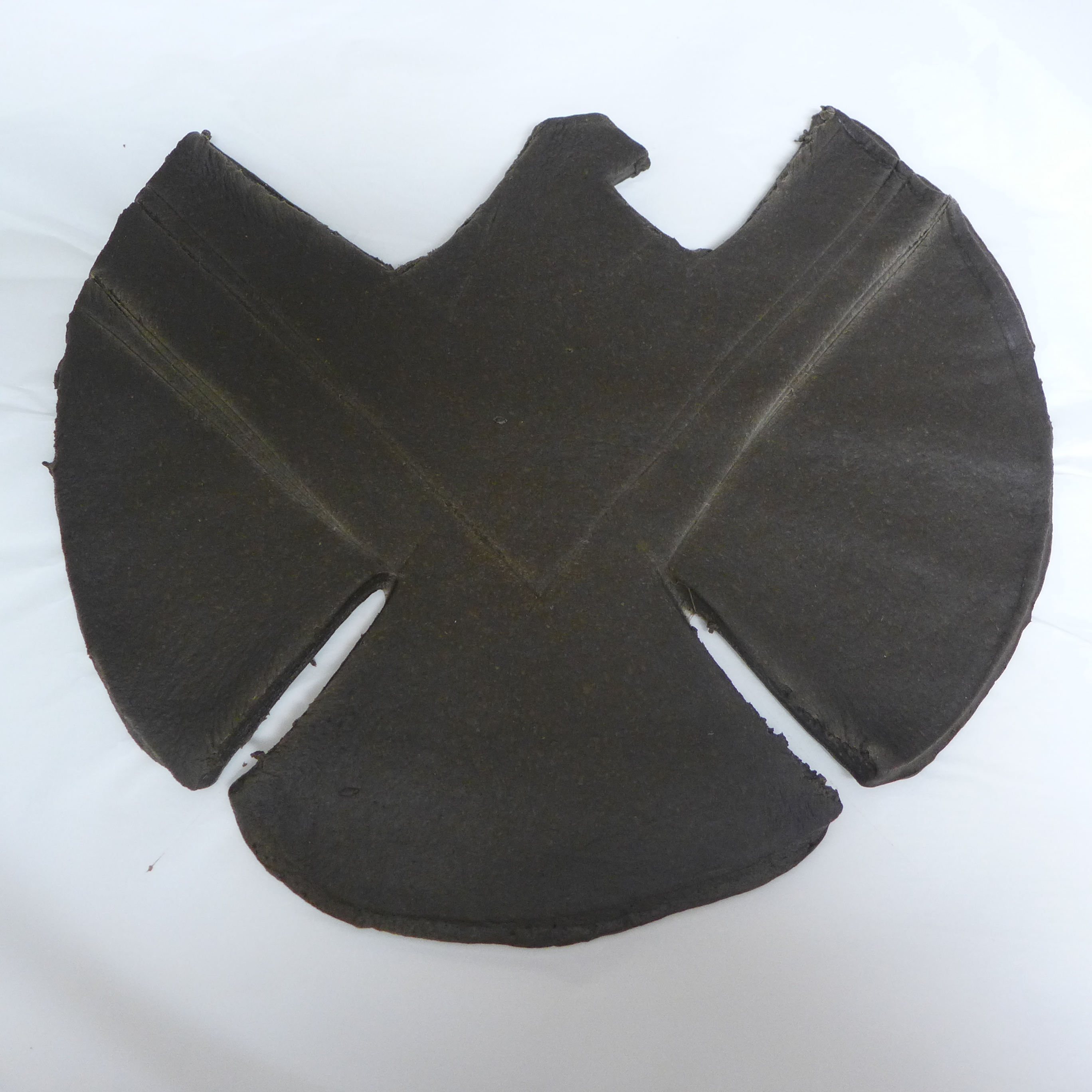 Use the tip of your knife to gently draw the outline of an Eagle head on top. This is basically just a sloping triangle for the shoulders and a sideways triangle for the head. One you’re satisfied, go ahead and cut it out. 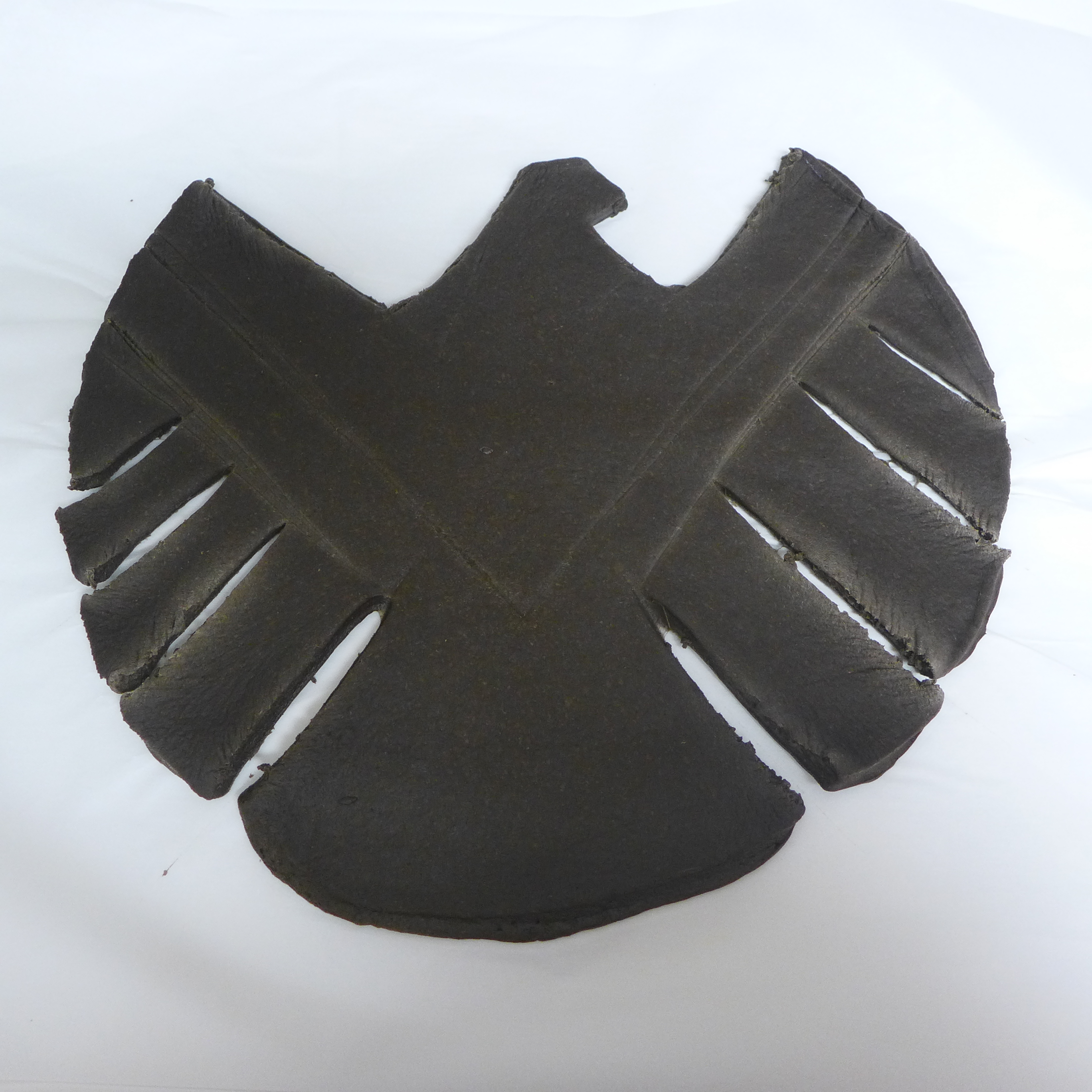 Use your knife to cut three feather’s into each wing.

Carefully transfer the dough to a large, flat baking pan. I used a pizza pan. This is why you need the parchment paper. If you cut the dough then try to transfer it with your big, clumsy hands, you’ll end up with a sad brown wad.

Now let the bread rise for another 35-40 minutes. You want to get a little fluffiness in it without losing shape, so don’t let the dough double in size. 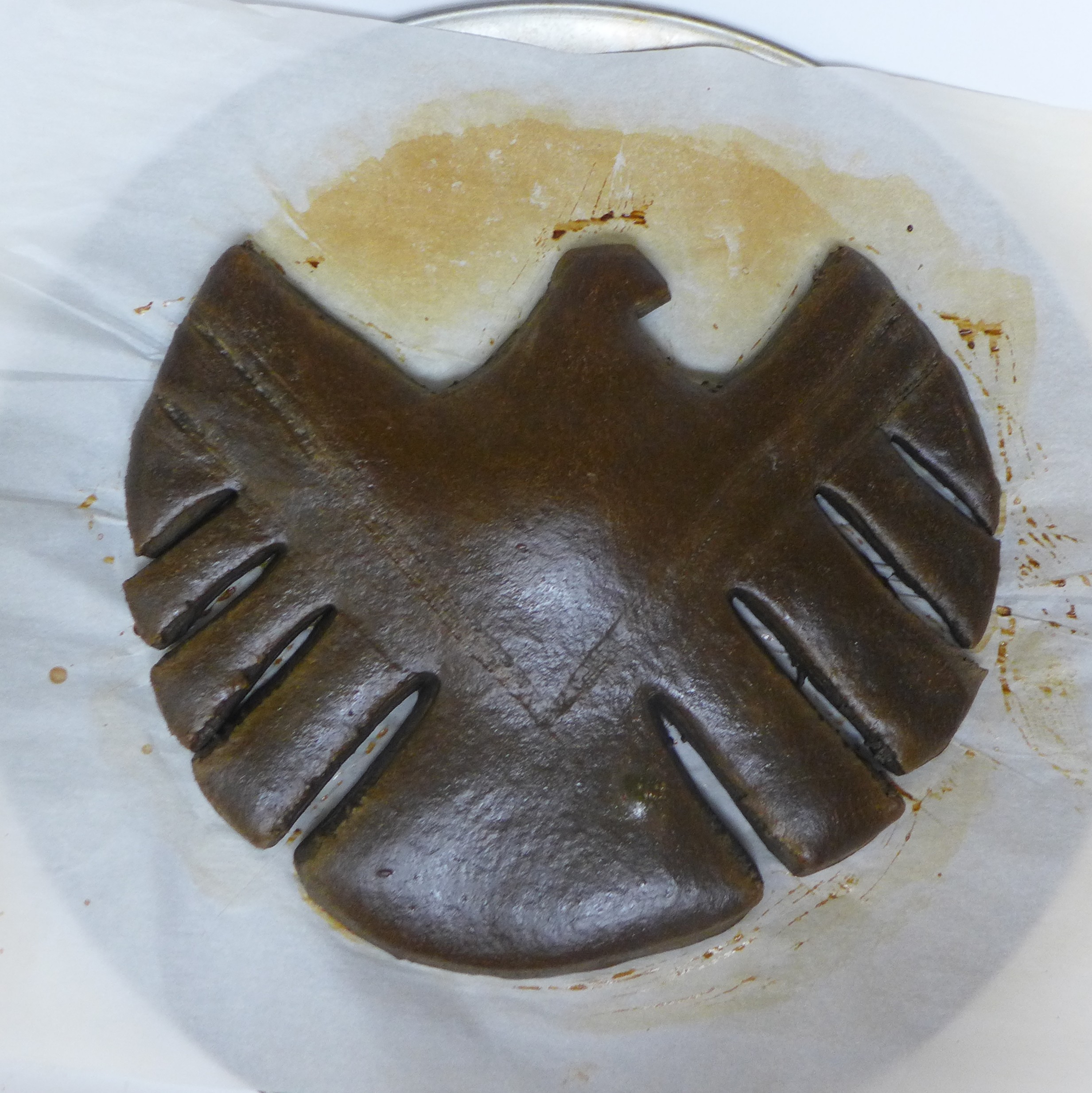 Bake at 350F for 30 minutes, or until the edges start to turn a darker, crustier brown. You don’t want to over bake this. The goal is a tender, fragrant, pull apart bread.

By sheer luck, the center of my Eagle’s chest puffed up during baking in just the right spot to make it look even more majestic. That didn’t stop me from ripping it’s wings off and stuffing them into my mouth. Majestically, of course.

This is best eaten fresh from the oven with a side of home made icing for dipping.

Once more, scrape the caviar out of the vanilla bean.

Mix the vanilla caviar with the milk and melted butter. Once those are a single, liquidy mass, add the powdered sugar and whisk violently until it’s free of lumps. If you prefer your icing thinner, add a teaspoon or two more milk.