Slitheen Pretzel Buns (from the new Doctor Who Cookbook)

Who needs to colonize Earth when you can just launch World War Three and mine the lovely radioactive debris without any pesky local sentients getting in the way of all your delicious profit.

In honor of the occasion, why not make some ham sandwiches from the semi-sentient pig you forced to crash land onto Earth? Follow these easy instructions to wrap the slaughtered pig up in a Slitheen shaped bun while you wait for the humans to finish wiping one another out.

If you’ve ever tried to make dyed bread, you know the crust always comes out golden brown with faint highlights of food coloring. Luckily for you, there’s a simple hack – bathe your dough in baking soda before popping it in the oven. Technically, this turns it into soft pretzel bread, which happens to be delicious. The process also preserves artificial colors in the baking process so your buns will have the glorious skintone of your new overlords while also being as soft as their pot bellies.

Start by warming the milk to the temperature of a nice bath. Don’t be afraid to put it in the microwave. After all, if the Slitheen have their way, soon the whole planet will be a radioactive wasteland.

Pour the warm milk into your stand mixer’s bowl. If you don’t have a stand mixer, you’ve got a bit more of a slog ahead, but this is totally doable.

Now whisk in the yeast and 1 tsp of sugar until the yeast has dissolved and the milky mix looks like the thin mud that will soon be polluting that creek in your favorite park. You know the one. A ship piloted by a sentient pig crashed into it.

Leave the yeast alone for 10-15 minutes. You’ll know it’s ready when it blooms like a mushroom cloud.

Dirty it up with your brown sugar, softened butter, table salt, egg, and green food coloring. Your whisk is still a mess from earlier, so use it to beat the mix together like it’s the spirit of the last humans left alive before you strip mine their planet.

Once you have a beautiful green sloppy mess, gradually add the flour, mixing with a fork after every ½ cup, until it transforms from a liquid to a solid.

If you have a stand mixer, attach the dough hook, set it to low, and let it knead away for 6-8 minutes, until the dough is glossy and smooth. If you’re kneading by hand, you’ll want to put your back into it for 8-10 minutes.

Once your dough is properly subservient, roll it into a ball, toss it in a bowl, and cover it with a clean kitchen towel. Leave it alone until double in size, usually about an hour. This is a good time to study your maps of Cardiff.

While you’re admiring your handiwork, bring 4 cups of water to a boil. Let it simmer until you’re ready for the next step. You want it to be as warm as a post-nuclear summer.

When you return, give the dough a friendly punch to deflate its spirits. Use your hands to flatten and stretch it into a rough rectangle. Cut it in half length-wise and turn each half into three trapezoids (a rectangle that’s narrower at the top) plus some scraps that will become heads and arms.

Now mix the baking powder into your boiling water. Add a little at a time or else you’ll end up with an elementary school baking soda volcano effect. Whenever it foams up, just stir until it settles down, then add more baking powder.

Your Slitheen overlord’s body will be one big trapezoid. The head will be a smaller version of the same shape. If you look at a Slitheen, their heads look like a jowly pyramid with the top blown off. The arms are just little snakes of dough with the ends trimmed.

You’ll want to roll your body and head around in the baking soda mix for about 60-90 seconds. Lift them out with a slotted spoon and lay them on a sheet of parchment paper. Use your fingers to pinch the top of the body upwards, forming a neck. Press the head into the neck.

Now grab two of the trimmed snakes and sort of swish them around in the baking soda water for 30 seconds or so. I used my fingers, but you can use a slotted spoon if you prefer. When you take them out, squish them onto your Slitheen’s sides.

Finish the slitheen by pressing two small blueberries into the face to create the eyes. This also helps the cheeks bulge out. Make the claws by pressing three slivers of almond deep into the ends of each hand.

You want a lot of space on your baking sheet, because much like a Slitheen escaping a human skin suit, these are going to grow. I suggest no more than 3 per baking sheet. That gives you just enough time to prep the second batch while the first one bakes.

Bake your Slitheen buns at 350F for 10-12 minutes, or until their bellies just barely begin to take on a lightly mottled brownish hue over the green.

When fully cooled, draw on a mouth using nutella or icing. Cut out a thin strip of fruit leather and wrap it around the neck for their skinsuit collars.

These rolls are thick enough to stand upright, so you can have your own Slitheen army watching over the rest of your food. Like any sandwich buns, you can stuff them with whatever you’d like, but I recommend serving them with ham and trimmings to celebrate the crash of London’s first (known) Alien.

Pre-order Dining With the Doctor: Regenerated now for 1 recipe from every episode of series 1-8 plus chapters for fish fingers and custard, cocktails, and special surprises for the 50th anniversary – over 180 original Doctor Who recipes!

Preview these tasty morsels from Dining With the Doctor: Regenerated – now available for pre-order – and come back every week between now and the winter holiday season for a new preview recipe.

Capaldi’s Coat Crepe Cake (from the new Doctor Who Cookbook)

...  I knew this was my chance to create a minimalist 12th Doctor to explore Abbot’s iconic two dimensional ... 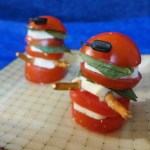 Dalek Caprese Salad (from the new Doctor Who Cookbook)

Bad Wolf Cheesy Crackers (from the new Doctor Who Cookbook)

...  episodes as amazing as the two parter The Empty Child/The Doctor Dances with a two parter parody of contemporary reality TV. ...