Since our logical Vulcan friends are well known as both vegetarians and adventurous eaters, I made this Vulcan Vegan Keema in their honor. Then, I ruined the vegan-ness it by putting it in puff pastry, because humans are horribly inconsistent. If you want to keep this Star Trek homage entirely vegan, VeganBaking.Net has a great recipe for a totally vegan puff pastry. Vegetarians who love their butter and carbs can take the easy route and pick up some pre-made sheets of puff pastry tastiness from their grocery stores.

If you’re neither vegan nor vegetarian but love the idea of ritually biting into a Starfleet Insignia (I’m looking at you, Klingons), you can stuff sheets of puff pastry with whatever ground meat (or meat-ish) mixture you happen to have around the house. Taco seasoning and lightly stunned gak work particularly well.

The observant among you may be wondering about the Horta in the background. Don’t worry, carnivores, that hearty recipe is coming up next.

Pour your olive oil into a large skillet. Bring it up to medium-high and add the onion. Stir it up to cook it for 3-4 minutes, or until it starts to turn translucent. Now add all the spices and the salt. Give it a good hearty mix until you have a nice paste of warm oil, onions and spices. Let the paste cook for another minute or so to really bring out the flavors of the spices.

Add the frozen fake hamburger. This stuff is entirely fat free and burns if you glare at it too hard, so don’t skimp on the olive oil. Turn the heat down to medium and mix until the oil mix has been completely assimilated into the invading hamburger. Let it cook for another 8-10 minutes before adding the frozen peas. Stir well and cook until the peas are warmed through but not yet wilting in color.

Take your skillet off the heat, let it cool for 2-3 minutes, then add the yogurt. Some fake yogurts can break apart into an unseemly mess if too suddenly and harshly traumatized by heat, so it’s best to let the dish cool a little first. Once you can safely reach in and grab a hot bite with your fingers, go ahead and add in all the yogurt. One more hearty stir and you’re done.

Normally, you’d serve this with a heaping plate of fresh basmati rice and red lentil dal, but today you’re on a five minute mission to boldly go where no breakfast snack has gone before.

If you’re making this all at once, put the Vulcan Keema in the fridge until it’s cooled. In the real world, we both know you’re using whatever random hamburger-ish mix you have in the fridge. I approve. You should really use that up before it goes bad.

Tug two opposing corners until your square looks more like a triangle with a bit of a droop in the bottom.

Add a heaping tablespoon of meat-ish mix to the middle of your puff pastry polygon.

This next part gets messy.

I essentially folded it in half.

Then folded the sides into place.

Then pushed and shaped it with my fingers until I had a Starfleet insignia shape.

That may look like a pretty steep center point, but these things actually spread quite a bit and lose a lot of definition while baking, so I advise making your raw Starfleet insignia even sharper and more exaggerated than my raw example.

Use a pair of kitchen shears to snip the command insignia shape into the upper middle of your pastry. It’s a five pointed star with the top stretched out to 3 times the length of any other branch.

Use a toothpick or cotton swab dipped in black food coloring to fill in the star.

Repeat the process on all 9 squares. Arrange them 3 inches apart, seam side down on a buttered cookie sheet and bake at 350F for 20 minutes.

These freeze up great. Two minutes in the microwave and you have an instant palm sized breakfast pastry for nerds.

Since I’m not vegan, I also made a beef-tastic Horta meatloaf. “No Kill I” is a nice sentiment, Ms. Horta, but both you and your silver sixlet eggs are too delicious for a life of peace. The recipe for roasted Horta is coming up later in Kitchen Overlord’s Star Trek Week.

The good folks at Out Nerd Me donated a gorgeous Star Trek poster to the lair. It can be yours.

To win subscribe to Kitchen Overlord’s YouTube channel and make a request for a future Sci Fi Life Hack you’d like to see her tackle. One random commenter will win the poster. 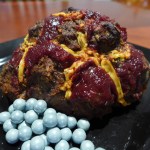 ...  One taste and you'll want to take these traditional, jam stuffed sugar cookies on a five year mission straight to your belly. Starfleet ... 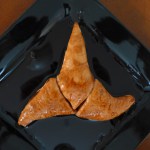