We need to talk to Clark. This time, his hero worship has gone too far. First the lookalike contest, then the creepy grownup Superman underoos he wears under his clothes. Now he’s even making his sandwiches look like the Man of Steel. If we don’t have an intervention soon, he’s going to make a kryptonite knife and show up to work one day in a hand made Superman skin suit. That mild mannered act isn’t fooling me. It’s always the quiet ones who end up leading some kind of freakish double life.

Look at what I found on his desk. He said a kid asked him to give this recipe and the fanboy bread to Superman, but that looks like Clark’s handwriting to me.

Hey, kids! You may not be able to lift a car, but you can still group up big and strong eating Superman Sandwiches.

Don’t worry, they’re not made from me. That would be cannibalism. Well, not precisely, since I’m actually Kryptonian, but eating sentient beings is wrong. Plus, your teeth can’t pierce my flesh. Plenty of people have tried.

Now, between you and me, you can make this using any white sandwich bread recipe. I like this one because the milk, butter, and eggs give it a wholesome heartiness while producing a sturdy loaf that can support whatever fixings you stuff inside your sandwiches.

To get started, warm your milk to the temperature of a comfy bath. Add the yeast, mix it up, and let it bloom for ten minutes. It’ll look like a mushroom cloud exploded in your bowl, but don’t worry. I’d never miniaturize my enemies inside their warehouse of nuclear weapons. Batman would, but I’m pretty sure Wayne Industries doesn’t produce “yeast.”

Once your yeast blooms, add the eggs, water, butter, sugar and salt. Mix them up until they look like an alien broth.

Now comes the hard part. Divide the liquid into three bowls. Add your yellow food coloring to one bowl, blue (plus 1-2 drops of black) to the second and red (plus 1 drop each of blue and black) to a third. These will become my cape, tights, and crest.

Add one cup of flour to each bowl. Use separate forks to mix each one until three balls of dough form. Each ball needs to be kneaded for about 6-7 minutes. If you have any Super Friends around, each one of you can tackle a different color. It’s not like the Wonder Twins have anything better to do.

Once the dough balls are kneaded into a glossy mass, cover them with your cape and wait about hour for them to double in size.

When you come back, punch each ball down. It’s not usually okay to hit things, but yeast doesn’t have a central nervous system, so it can’t feel pain. Have fun!

Now roll the yellow and red balls out into flat rectangles. 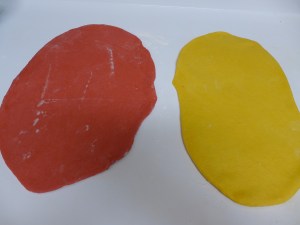 To make my crest, start by cutting the red dough into two smaller rectangles. This recipe makes two loaves of bread. That gives you one to practice on and one to show off to your friends.

Fold one of your red rectangles twice, like you’re folding a fan letter to send your favorite superhero. If you look at it sideways, you’ll see it’s already shaped like a wide S. 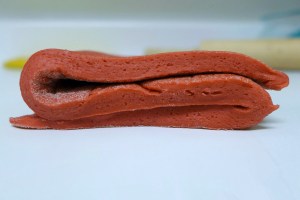 Now cut your yellow dough into two pieces. Take one of those pieces and cut it in half, lengthwise. You want it to be just as long as your red dough, but just a little bit narrower.

Lift the top fold of your S and tuck a strip of yellow inside. Repeat with the bottom fold. 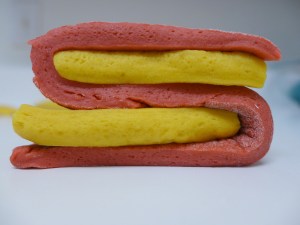 Look at that. You’ve made the middle of my crest! To finish up, roll your blue dough out flat. Cut it into three rectangles. Tightly fold one rectangle of blue dough around your red and yellow S. 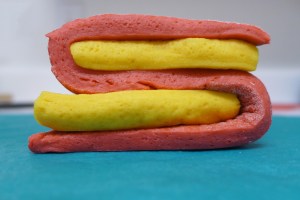 Let the seam overlap underneath so you don’t end up with any red or yellow awkwardly bursting through. Make sure to keep the whole thing a neat rectangle with a clear top and bottom. 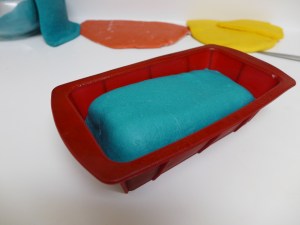 Carefully place your dough into a buttered pan. Be careful to make sure you don’t turn the dough sideways or else your S will bake at a funny angle.

Now that you’ve made your practice loaf, repeat the whole process again with the rest of your dough.

Let the dough rise for another hour, then bake it at 350F for 30 minutes. 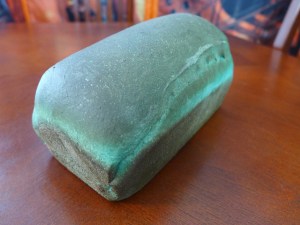 Once you take the loaves out of the oven, let them sit in their pans and cool for at least 10 minutes or else you’ll end up with multicolored crumbs all over the place. As badly as you’ll want to peek inside right now, I promise you’ll get the best results if you let your super bread cool completely before slicing it. 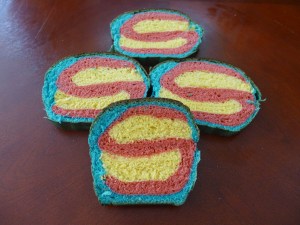 When you slice the bread, remember only one side will look like an S. The opposite, Bizarro-World side just looks like a weird red swoosh. Pay attention to which side is facing out when making your Super Sandwiches.

Send me a picture of you eating your healthy, home made Super Sandwich and I’ll pin it up at the Hall of Justice.

If you’ve been to Kitchen Overlord before, you know I love to play with my food. I’ve spent over two years creating and testing unfashionably delicious carbs, and now I’m just a few weeks away from being able to share 100 pages of gluten-full glory with the world.

You’ll find nerdy recipes inspired by everything from the X-Men to Orphan Black, Transformers to Teenage Mutant Ninja Turtles, and Deadpool to Deep Space Nine. And, of course, the real reason you’re here – Sandworm Bread.

...  recipes can be made purely from the list above. BREADS Superman Sandwich Slices You know that box of food coloring that’s been ...

...  the delicious scent of fresh baked breads. Yeast Breads: Superman Sandwich Slices A snowday is the perfect time to show off your super ...

...  to use the same technique here as I used in making the Superman Bread. Fold the red dough into a tight S shape with a lot ...