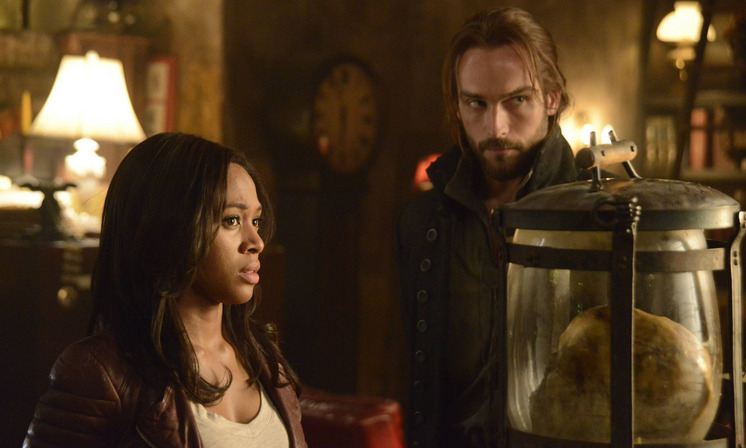 It’s no secret that I am ridiculously in love with Sleepy Hollow. Ichabod and Abbie’s exchange in “Sanctuary” (Season 1, Episode 9) is a great excuse for me to squint sidelong at our traditional Thanksgiving meals.

“The pilgrims didn’t have any sugar to make a sauce, let alone a pie. Venison, not turkey was served. It would’ve been a miracle if a single half starved pheasant trotted past them,” Ichabod replied.

How accurate was he?

WHERE DID THANKSGIVING COME FROM, ANYWAY? 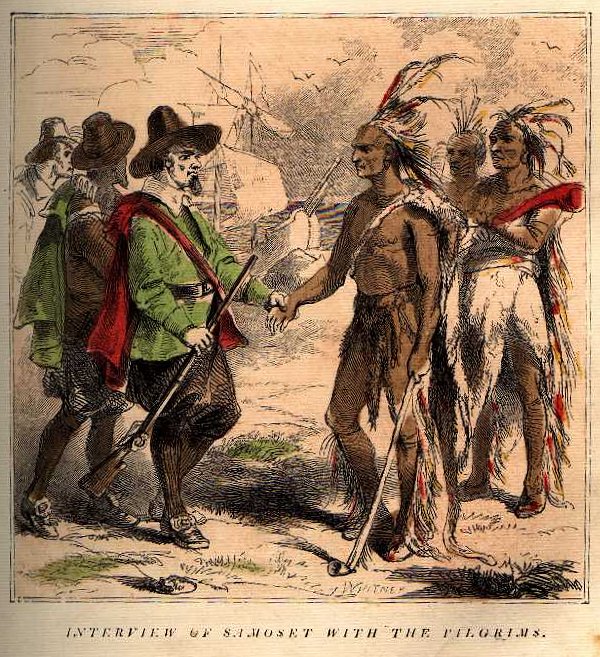 First off, keep in mind that the American Revolutionary War was a good 160 years after the mythical first Thanksgiving in 1621. For Ichabod, the first colonies were as far in the distant past as the Civil War is for people living today. He wasn’t speaking from memory.

People usually cite the first Thanksgiving as a three day long colonial feast at Plymouth Plantation in the fall of 1621. Colonist Edward Winslow wrote about it, saying:

“Our harvest being gotten in, our governor sent four men on fowling, that so we might after a special manner rejoice together after we had gathered the fruits of our labor. They four in one day killed as much fowl as, with a little help beside, served the company almost a week. At which time, amongst other recreations, we exercised our arms, many of the Indians coming amongst us, and among the rest their greatest king Massasoit, with some ninety men, whom for three days we entertained and feasted, and they went out and killed five deer, which we brought to the plantation and bestowed on our governor, and upon the captain and others. And although it be not always so plentiful as it was at this time with us, yet by the goodness of God, we are so far from want that we often wish you partakers of our plenty.”

Thanksgiving as we know it didn’t really come about until 1863, when a national holiday was created to help unify people behind a shared holiday that would encourage national pride.

Which brings us back around to Ichabod’s scorn over our idea of a traditional Thanksgiving meal. 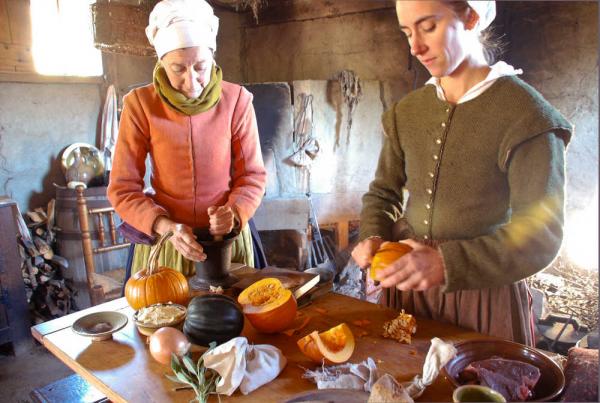 First off – there were no pies or sauces. The sugar they brought with them from England would’ve been long gone. That means no cranberry sauce or pumpkin pie. In fact, while stewed pumpkin was indeed on the menu, a pumpkin pie would’ve required wheat flour for the crust and dairy for the custard, neither of which were available.

Neither white potatoes nor sweet potatoes grew in the region, so the pilgrims didn’t have any mashed potatoes or yams, either.

To add insult to injury, they didn’t even eat turkey. The main meal was venison which was supplemented with some wild pheasants and geese as well as plenty of fresh fish.

SO WHAT WAS ON THE FIRST TABLE? 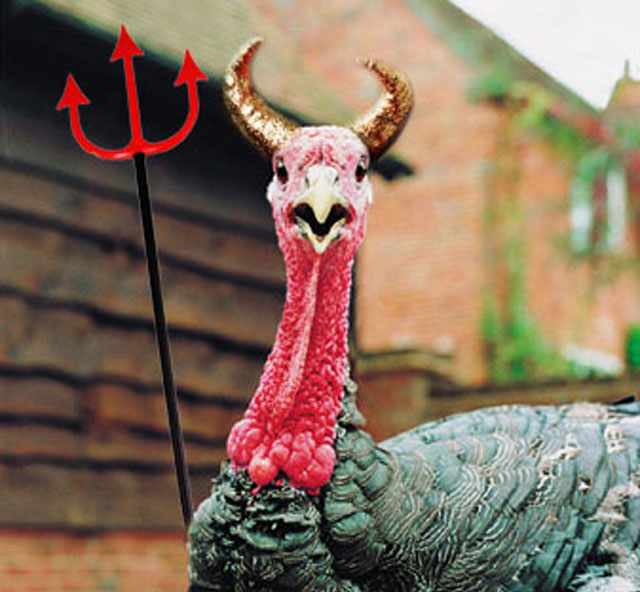 It was an incredibly meat-tastic meal. The main course was indeed venison supplemented with a handful of pheasants and geese. To make it even more rich in protein, they also served plenty of locally caught haddock and cod. Some of the meat might have been roasted, but most of it was boiled.

Never forget these people were British. That means all that boiled meat was served with heaping sides of vegetables boiled into mush. They would’ve served stewed onions, stewed pumpkin, and boiled beans. For dessert, maybe a mix of stewed prunes and raisins. 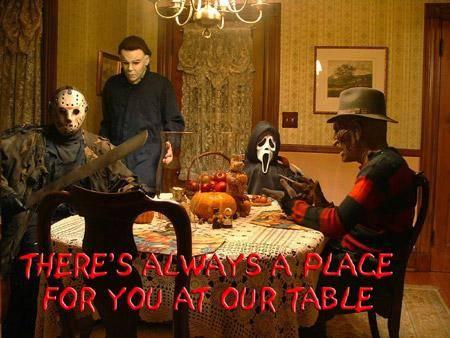 It took a few decades after Lincoln’s Thanksgiving reboot for a national menu to form. For awhile, there was huge diversity in regional cuisine. Eventually, people settled on indigenous American foods served in tasty ways that would’ve been totally unrecognizable to early colonists. Sure, turkey, cranberries, corn, white potatoes, sweet potatoes, and pumpkins all come from the Americas, but what you see on Thanksgiving tables today is really the first American instance of fusion cuisine.

Think about it. We took a perfectly good savory vegetable mostly served stewed with salt, vinegar, and whatever spices were at hand and decided to add sugar and milk and sugar and eggs and sugar and a few more spices then pour it into a crust made entirely from European staples of butter and flour. The resulting pumpkin pie is freaking delicious.

The best example of awesome revisionist cuisine has to be stuffing. We mix corn and wheat flours to make cornbread, something neither Europeans or Native Americans would’ve found familiar, then we do something terrifying with it. In fact, if you really think about it, cornbread stuffing sounds like something the 11th Doctor would come up with because it’s “pudding and savory at the same time.”

Europeans enjoyed bread puddings for centuries before sailing to the Americas. Imagine if someone told these early Brits, “I’m going to make you some bread pudding, but first, I’m going to replace all the raisins with celery and onions. Yes, I know that’ll taste terrible with milk, so I’m going to replace the milk with chicken broth. While I’m at it, I’m substituting sage for cinnamon. Now take a bite. It’s good, I promise. Fine – I dare you!” I’m glad they did, because stuffing is my favorite thing on the Thanksgiving table.

The true spirit of Thanksgiving is all about taking whatever you have available and making the best of it. Lincoln used a convenient story to make a national holiday. Later Americans took savory foods and used them to make dessert while transforming dessert into a savory side, all because of what they had available at the time.

So if you end up with an unexpected guest at your table with strange ideas about food (even if they don’t come with a British accent and a stylin’ period coat) try a few bites of whatever weird dish they contribute. It’s the American thing to do.

...  Z. Presto! You’ve got a lightning bolt. The elementary school teacher who loved making you do Tangrams would be so proud! Set your ...

...  a vegan or gluten free pie crust from scratch, or go old school with your favorite all-butter crust. Any pastry shell will ...

...  step is important - queue up an episode of something you really like. I mean it. This is the time to get caught up on some Arrow or ...