What’s in the Box: KlutchClub Review

After three deaths and nine maimings at Thunderdome #7, I decided to order my minions a somewhat more “nutritious” subscription box.

When I first received this month’s package from KlutchClub, I thought The Pharaoh sent me a purse as a surprise present. Instead, I found a bakers dozen of healthy or interesting products, most of which are actually ingestible.

First came the stimulants. The small bag of acid free coffee intrigued me. I didn’t know you could make coffee from acid. I’ll have to experiment more in the labs. Everything I try burns through the “volunteers” throats, though the ones who can still speak say mine is delicious. I can’t speak for the package from Tyler’s. There was also a bottle of wheat grass infused aloe vera, which honestly made me wonder if it was meant more for topical or internal application. So far, people say both are soothing. Well done, KlutchClub. With those came the Tang-o-LIcious Octane energy shots. I can vouch that they do indeed taste like Tang, but the promise of better athletic performance or mental acuity seems dubious.

What you don’t see here are the Acai Berry Energy Chews or the Smart Pop, because they were eaten before they could be photographed. The Smart Pop did indeed temporarily increase the intelligence of our lab rats. They sent my guards scuttling down a maze for a full 3 hours before they were tempted to drink a Four Loco and chill out. I took the Acai Berry Chews to a stressful interview with another overlord. I can vouch that after a mere four hours of sleep, the purple tasting chews might have had some kind of impact. They certainly tasted purple, which left me in a mood to boil wine down into a paste while climbing fortress walls. This is how I feel most Tuesdays, though, so I can’t say how much of that attitude had to do with the purple Acai energy.

The fitness buffs among my minions could either hike into the woods with a single meal for sustenance or fight the sharks with lasers attached to their heads with the surf sweets to nourish them. Let’s be honest. I’m not that interested in sharks (though I love lasers), but some things are traditional. Reports suggest that the surf sweets taste like you hunted a family of vegan gummy bear hemp farmers who had just completed a juice fast.

The Whole Food Bar likewise tasted assertively healthy. It’s hard to grind and compact six servings of fruits and vegetables into a 50 gram bar, especially when ensuring it’s vegan free, non dairy, and chock full of 10 grams of protein. The ingredients of the dark, chocolaty brown bar include “Fruitrim” (a propitiatory blend of fruit juice and sugar) and “Superfood Blend” which apparently needs no explanation. The surprisingly moist interior tastes like Ruby from The Jetsons decided  Star Trek Replicator rations needed to taste more like “Fruitrim.” Welcome to the health bar of the future.

Your skin is not exempt. In addition to the full sized bottle of Aloe and Wheatgrass “juice” KlutchClub provided a full sized organic bar of soap. For those of you who are afraid of dropping the soap in our lair’s communal showers, they also generously provided four good sized packets of papaya body wash, two of hemp body wash, and one facial cleansing gel.

For $18, this is one of the better packages delivered to my lair. The large, oversized shoebox contained eighteen individual products, including two full sized items, multiples of several smaller items, and a good range of vegan fun spanning everything from sport beverages to sport tape to sport hygiene. Really, you won’t find a better deal out there for sporty vegans.

...  FanboyTV manly men I roped into joining me for our video review agreed that the crate had value all by itself. I might’ve had an ... 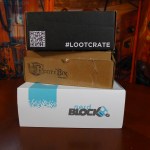